As many applauds his stern UNGA speech 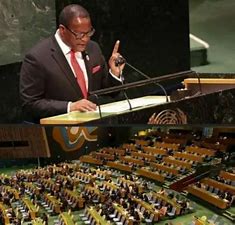 President Lazarus Chakwera delivered his speech at the 77th United Nations (UN)  General Assembly where he called on the world’s major lenders to forgive the debts of poor countries.

In his speech, Chakwera said least developed countries are grappling with unsustainable debt levels and there is need to resolve this challenge.

Malawi leader argued that unsustainable debt is a new form of slavery and just as leaders of past generations worked together to end old forms of slavery, currently leaders also need to join forces to end new forms of slavery.

He noted that the Managing Director of the International Monetary Fund (IMF) Kristalina Georgieva recently urged major lenders to show leadership by relieving of debts that are shackling poor countries.

“Even loans that were given and received in good faith have become unsustainable in the recent and current climate of unforeseen external shocks.

“So I join her in reiterating that call. And I commend China for leading by example by fulfilling the pledge it made last year to forgive interest free loans owed by 17 African countries,” said Chakwera.

He  added that as president of a country that stands to benefit from debt relief, he does not regard Malawi as a country entitled to debt relief and  he is fully committed to be held accountable for the responsible use of the money saved through debt relief.

“We too must prove worthy of such a system by using it to cushion our citizens against the worsening financial volatility, trade cost and human suffering that the debt and other factors are causing,” said Chakwera.

The call comes amid revelations that Malawi’s public debt jumped from  K5.65 trillion in June last year to K6.38 trillion in March 2022, which means the Lazarus Chakwera’s administration was borrowing an average of K81 billion a month for nine months.

Finance Minister Sosten Gwengwe said on Wednesday that the rate of borrowing is unsustainable.

“This is a cycle that ought to be broken,” Gwengwe said.

Currently, Malawi, which is facing forex and fuel crises, is struggling to secure a programme with the IMF due to the unsustainable debt levels.