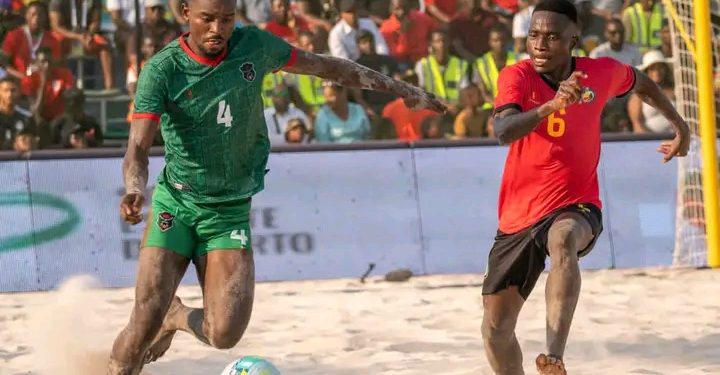 -The Malawi National Beach Soccer team has failed to suit the Vilankhulo Mozambique hot weather as they have suffered a 4-2 defeat in Beach Soccer African Cup of Nations opener in Mozambique.

Willy Kumilambe’s boys started on a high note in the first period as they fast took a shot which went off target.

They kept playing well until they got match needed goal at 9th minute through Dala Simba.

The goal which they failed to defend as the host playing in the presence of their state President Filipe,reorganized too fast and scored through Nelson Manuel who was outstanding on the day.

The first period ended with the two sides equaling power though Malawi missed a lot of chances as they look shaken in their defence.

In the second period, the visitors started just as they did in the first period no wonder they extended the lead in the 15th minute through captain of the side Sandarm Saddie who was left unmarked.

But as Malawi was still celebrating for the goal Mozambique equalised again through Julio Manjate at 23rd minute who capitalized on a back pass by Malawi’s defender leading to miscommunication at the visitors back,and that was an easy goal for Mozambique.

In the last period Malawi kept pressuring the host but their efforts ended off target hence the host capitalized on this as Gerson Chivale netted the third goal at 26th minute before Nelson Manuel completed his brace at 33rd minute.

Next match for Malawi will be on Monday against Morocco which will play their first game at the tournament on Sunday against the host Mozambique who now top group A.