by Alick Chisi
in Entertainment, Music
0 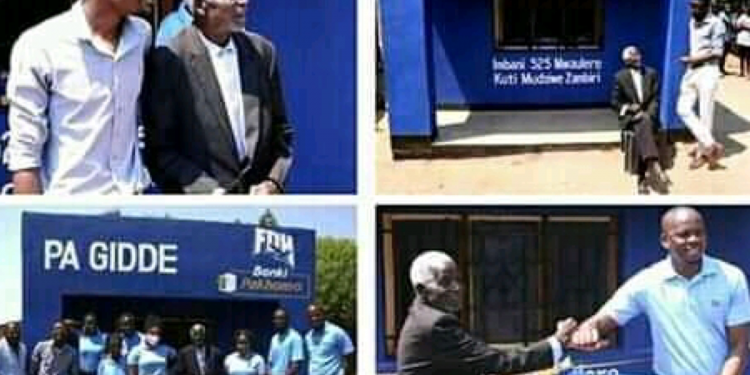 2
SHARES
711
VIEWS
Share on FacebookShare on TwitterShare on Whatsapp

Malawi’s legendary musician Giddes Chalamanda has been given a well constructed and fully stocked grocery store worth K2million.

Making the donation at his home, Njuli in Chiradzulu on Saturday, was one of the country’s commercial banks FDH Bank which promised Chalamanda of the development some months ago through it’s brand ambassador Patience Namadingo.

The bank made the promise after the Buffalo Soldier star come out clear when he was recording a Mash up with musician of the moment, Namadingo that he is financially handcuffed and needs to be bailed out.

Namadingo told Chalamanda that the bank will give him something that will alleviate the hardships he was encountering.

According to FDH Bank’s marketing manager Ronald Chimchere, the donation is one way of thanking the 90 year old Chalamanda for his contribution in the country’s music industry as well as minimizing financial constraints the musician is facing.

Chimchere said as a home grown bank they prioritize uplifting lives of locals hence their gesture which he said is to change life of the legendary who was struggling to feed his family.

“We are very happy that the project has come to completion, it has been a while now since our brand ambassador Patience Namadingo brought this to light so after a discussion we said let’s honor the legend.

“As a home grown bank we said this is a project worth our soul. Standing here seeing the project fulfilled we are very happy and we just hopping that from now on, it will make a difference not only to Chalamanda but the community as well.” Said Chimchere.

Reacting to the donation, Chalamanda who was over the moon said he is so grateful for the donation which he said will meet his needs as an elderly man who could not go to work.

Concurrently, Namadingo who facilitated the move said he is so happy that the legend has now been given something which will be his reliable source of income.

Meanwhile, the bank has announced that
The store will also be offering FDH’s Banki Pakhomo services to the community around Njuli.