As they deliver a petition at the DC's office 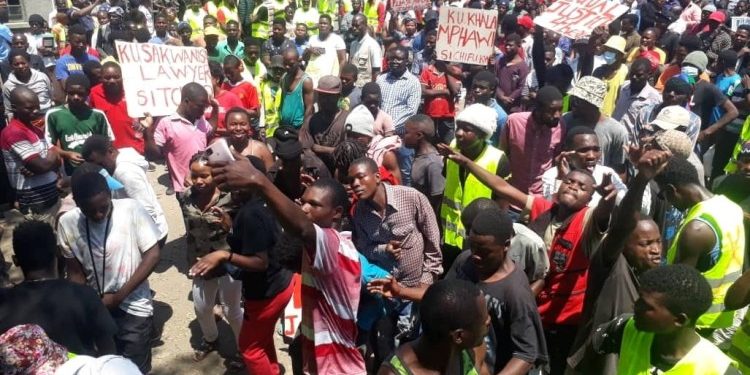 Protesters led by musician Fredokiss marched in Blantyre today demanding President Lazarus Chakwera to pardon Mussa John, a teenager who was sentenced to three years in prison for being found in possession of Chamba.

Mussa was initially sentenced to eight years for being found in possession of Chamba (indian hemp) but his sentence was later reduced to three years by the High Court.

Addressing protesters before the march started, Fredokiss, real named Penjani Kalua, argued that there is selective justice in Chamba cases because some people who commit similar crimes are fined and released after paying the fine.

He suggested that Mussa may have been unfairly treated because he is poor and did not have a lawyer when his case was heard at the magistrate’s court.

“Is poverty a crime? If you know you are poor and cannot afford a lawyer, let us march,” said Fredokiss.

Mussa’s mother thanked people for leaving their businesses and showing up to march for her son and  she prayed  for blessings for the protesters.

The protesters marched from the clock tower in Blantyre to the Blantyre District Council where they presented their petition.

In their partition, the protesters have given Chakwera 21 days to take action.