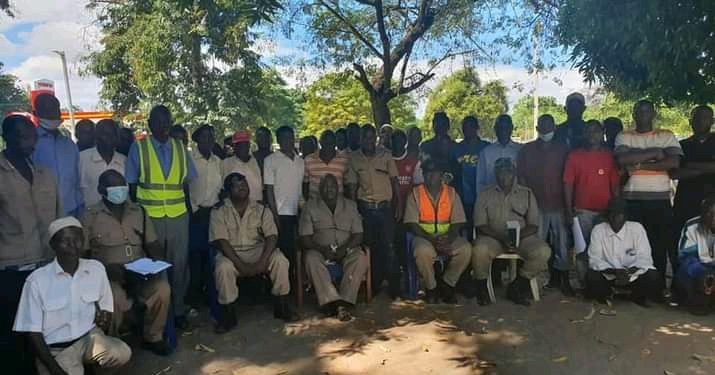 As one way to reduce the increase in robbery and breaking cases in the area, Namwera Police Post in Mangochi District conducted a meeting with watchmen within their jurisdiction.

The meeting took place on October 25, 2021 at the Police premises where 20 watchmen from various estates, government offices and individual shops attended.

The team which was led by Assistant Superintendent Davie Bulla pitched into issues of crime prevention measures, communication skills, tools and equipments in security with an aim of shaping them into vigilant and effective security personel.

The Police also registered all security guards to ensure that every guard is known for easy identification and follow-up.

Among other pertinent issues, the watchmen have been encouraged to report matters in time, not to conceal information to the police, not to leave their posts unattended, patrolling around their premises, avoid eating food or drinks brought by strangers and sleeping on duty.

“Security is paramount and everyone needs a secured environment in order to develop. As a watchman, your first priority is to protect your own life, l urge you to be always vigilant and stop the tendency of guarding several shops at once because you are putting your own life at risk. In addition, you should always make sure to rest after knocking off In order to prepare yourself for the next session of duty ” advised Bulla.

Speaking on the same meeting, Child Protection Officer for Namwera Police Post, Sergeant Cosmas Patel reminded the security guards on strategic positioning, checking properly around the premises when on duty, taking and handing overs. He also encouraged them to have phone numbers of Police formations and several Police Officers to call in case of emergencies.

Bayson Mwambucha from Namwera Market who represented all the watchmen, applauded the Police for the initiative.

However, he outlined some of the challenges the watchmen are facing which include: low wages, late payments, lack of equipment, overworking and no contract agreements among others.

In response to their grievances, Police in the area has assured them to meet their employees to ensure that the grienvaces are looked into. Police has also communicated with the owners to provide the security equipment to their guards for enhanced safety.

Namwera Police Post has also scheduled a similar meeting to be held soon with their employers inorder to impart them with the knowledge to ensure that there is balanced and continued flow of security management skills between the two parties.