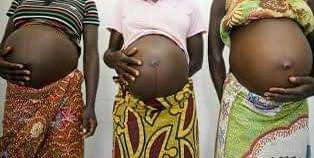 Over 40, 000 teenage pregnancies were recorded in the country within eight months that included the school break due to Covid- 19 pandemic.

Plan International Malawi and OSSEDI on Thursday organized the training for Nsanje District Executive Committee and Gender Technical Working Group to develop their capacity to deal with the current impact of Covid-19 pandemic in Nsanje as the national trend an increase in sexual and Gender Based Violence (GBV)by almost 25 per cent.

The two implementing partners described the situation as worrisome and likely to undermine efforts on gender responsive interventions as the country recorded 12,995 child marriages.

Plan International Malawi coordinator, Caleb Pemba said the increase by 26 per cent in pregnancies coupled with rising cases of sexual and GBV was a setback to activism on child rights to education and wellbeing.

“The situation is worrisome and stakeholders and authorities need do more in trying to address the situation and more is needed to rescue the girl child from the dangers,” he said as his organization implants several interventions on child rights.

OSSEDI District Coordinator for Nsanje, Ezra Black disclosed that his organization was worried with the increased polygamy trends in the country saying 13 women aged between 15 to 45 years are engaged polygamous union adding that this affects education to about 21 percent of children residing in rural areas.

“This increase is a worrisome development in as far as promoting girl child rights is concerned because if a girl is coming from a polygamous family chances are there that this girl  cannot attend school hence her higher chances of getting pregnant while searching for ways and means to survive,” he said.

From December 2020 to February 2012, Nsanje recorded 21 pregnancies, 85 child marriages and efforts were made to withdraw 62 girls from child marriages, according to a sample from Nsanje District Social Welfare Office.

District Chief Planning and Development Officer for Nsanje, Smith, Mnenula said the district’s education office was working together with other stakeholders to implement the government readmission policy to girls who dropped out of school due pregnancy.

Plan International Malawi and OSSEDI are implementing a year project called Step Up, a Spotlight Initiative programme to promote the United Nations Sustainable Development Goals especially goals 5, 16 and 17 which empower all institutions including civil society organizations and community based organizations, through practical implementation and understanding of human rights instruments and gender equitable norms.