AFORD OPENS HQ IN LL in an attempt to rebuild 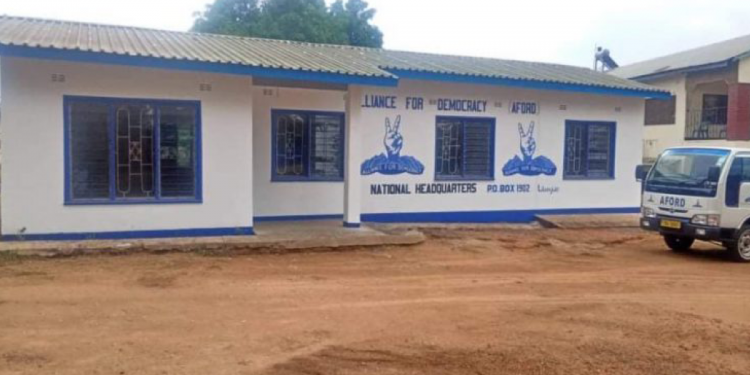 Alliance for Democracy (AFORD) President Enock Chihana says the party has engaged an extra rebuilding gear, by among other operations opening national headquarters in Lilongwe.

In an exclusive interview, Chihana said the party has since secured offices in low density Area 47 so that it acts as a central point in the rebuilding process of the party.

He also said the party intends to open regional offices in the North and Eastern regions. “We cannot talk about revamping the party
when we still have no offices,” he said. Adding that they now have opened doors to anyone wishing to join the party.

“I have advised my team to say open the doors — pasapezeke otchinga (nobody should be barred from joining),” he said.

Chihana expressed optimism that the party will regaining its last glory. The party has for the first time, recruited a vice-president from the South— Dr.Louis Mbilizi from Chiradzulu.

Thaulo has said he decided to join AFORD because of the negative environment in the DPP, that has potential to dent his political ambitions.

Chihana said following the announcement of the party’s rebuilding, people have been showing willingness to join Aford.

Chihana acknowledged that lack of communication with the grassroots from all regions of the country, had been a major setback to the party’s popularity.

Founded by the late Chakufwa Chihana, AFORD has, over the years lost most of the seats in Parliament from the 30 seats it enjoyed from 1994 to one through Yeremiah Chihana of Mzimba North now.

Alliances with the then ruling United Democratic Front and opposition Malawi Congress Party led to disagreements within the rank and file of the party leading to formation of factions and splinter parties.

In the recent past, Chihana has been tussling for the party presidency with former Karonga Central legislator and Deputy Minister, Frank Mwenifumbo.

The two announced their reunion during the signing of the Tonse Alliance partnership in Lilongwe, when they both declared their
allegiance to the partnership. Mwenifumbo later left the party and joined UTM Party.