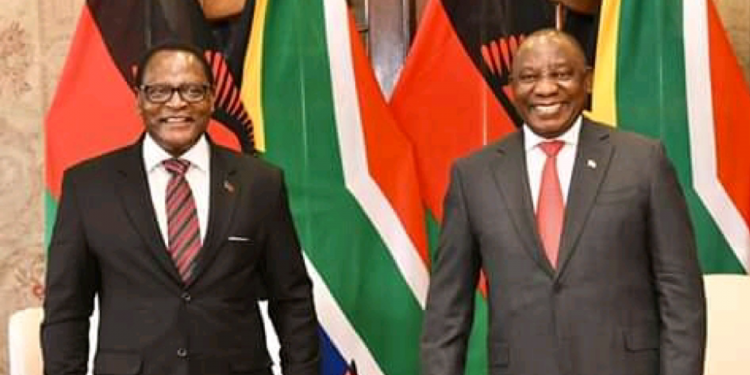 The Ministry said in a strongly-worded statement that the delay to depart South Africa for home was caused by the South Africa government’s refusal to allow Malawi’s advance delegation to travel back home together with the Malawi leader, citing “unspecified security reasons.”

The President had ended a two- day working visit during which he held bilateral talks with his counterpart Cyril Ramaphosa.

“The South African authorities inexplicable refusal to let the Malawi President leave with his advance team came despite being informed of the arrangement in advance, in conformity to a similar arrangement made in all the countries President Chakwera has visited thus far.”

The Ministry said dissatisfied with the “vague security reasons, the President decided that he would not travel back to Malawi without his advance team.”

The presidential plane was set to depart South Africa at 15.30 hours, but the delegation spent the next six hours “trying to reason with the South African authorities before their proposal was accepted.”

“As such, the Malawi delegation was justified to dismiss as unacceptable and unsatisfactory the
South African authorities’ use of unspecified security reasons to hinder President Chakwera from leaving without his advance team.”

The Ministry said Malawi was aware and grateful that a public statement was recently issued by Pretoria, “exculpating President Chakwera from false allegations dominating the South African media that his presidential plane was used as a conduit for trafficking two Malawians wanted by South African authorities,” in apparent reference to Prophet Shepherd Bushiri and his wife Mary.

The Bushiri’s, who controversially returned home last week, jumped bail in South Africa, claiming their lives were in danger after being accused of alleged money laundering and illegally obtaining permanent residence in the Rainbow Nation.

Pretoria says it has started processes to extradite the powerful couple to answer charges in South Africa.