Nkata-bay fisheries shot in the arm by Ripple Africa.

by Chaweya Mzembe
in Environment
0 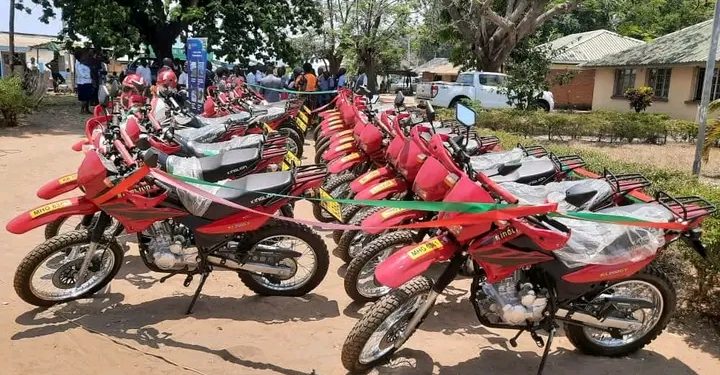 The Ministry of Natural Resources and Climate Change has called for a collaborative effort in the promotion of the fishing industry as one way of increasing fish production in the country.

Minister responsible, Eisenhower Mkaka made the remarks when Ripple Africa donated 23 motorcycles worth K60 million to Nkhata-Bay Fisheries Office to ease mobility challenges among fisheries extension workers in the district.

Addressing people during the handover ceremony of the motorcycles, Mkaka commended efforts that Ripple Africa is doing to promote the fishing industry.

The minister called on other players to emulate what Ripple Africa is doing by coming up with alternatives that can help in increasing fish production in the country.

He said increased fish production can help to minimize the challenges of forex shortage that the country is currently undergoing through increased fish exports.

Country director for Ripple Africa, Force Ngwira, said the government cannot manage to solve some of the challenges on its own hence the need for other players to come in.

“I would like to encourage other international organisations working in our country to come in and support government programmes in different departments,” said Ngwira.

Assistant fisheries Officer for Nkhata-Bay District, Joy Ng’ambi said the motorcycles will reduce the challenges of mobility that the officers were facing in their work.

Fish is the single most important source of protein in Malawi, contributing about 60 to 70 percent of national animal protein.

The fisheries sector contributes about 7.2% to the gross national product and generates annual gross production revenue of approximately $170 million to the national economy.