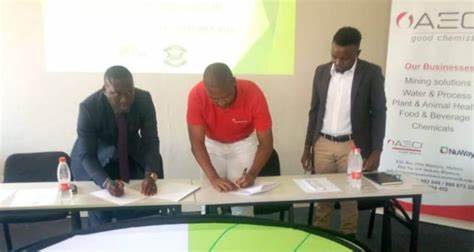 Super League of Malawi (Sulom) has signed a Memorandum of Understanding with farm inputs supplier, Farmers Organization Limited (FOL), which will be sponsoring the Farmers Man of the Match Award in all the remaining Super League games.

Speaking during the unveiling ceremony on Thursday in Blantyre, FOL’s National Sales and Marketing Manager Ronald Chilumpha, said they have decided to sponsor man of the match awards as a way of expressing commitment towards football development in the country.

Chilumpha said the gesture is also a way of appreciating mutual relationship with farmers whom he said most of them love football and this will help the organization in reaching out to many farmers in as far as their products are concerned.

“We have operated on the market for 42 years and our drive has always been to support farmers to succeed in farming. There are similarities between farming and football since everybody wants to achieve a goal by the end of a season.

“The farmer puts his team in the field; the sprayer, seeds, pesticides and if they field a good team, they are bound to succeed and the same applies to football, and that’s the reason why we decided to intensify the connection between farming and football by sponsoring man of the match awards,” said Chilumpha.

He further added that the sponsorship which is worth K4.5 million, will cater for the remaining 78 TNM Super League games where the best performer in each game will be walking away with K30,000 cash, miniature trophy and various FOL products.

The National Sales and Marketing Manager also expressed optimism that come next season, the sponsorship will continue with new agreements.

“Today we have signed the MOU on the remaining 78 TNM Super League matches, however, we are so hopeful that come next season, we will bounce back with a new agreement and even better than this agreement,” he added.

In his reaction to the sponsorship deal, Sulom President Tiya Somba Banda, thanked FOL while saying the gesture will bring competitiveness among Super league players which he said will in return help in improving the standard of the elite league.

“I would like to express our gratitude to FOL for the bold decision they have made to come into football and more specifically to inject K4.5 million directly to the players. As you are aware, one of our core principles as Sulom was to make sure that we motivate the player.

“We know that for the league to be competitive, the player has to be motivated. We believe that the partnering of this company will harness and develop a high performance culture amongst our players,” said Banda.

He then assured FOL of total support regarding the organization’s sponsorship objectives of promoting their products so as to enable the distributor come back with another package on the next sports calendar.