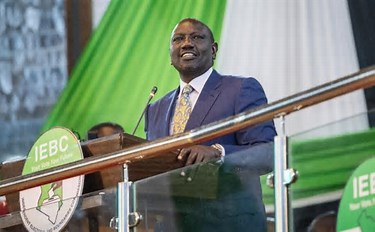 Vice President of Kenya William Ruto (55) has been declared as the winner of the presidential election after taking 50.49% of the vote.

The announcement came after divisions in the elections commission as four out of seven commissioners held a press conference declaring that they would not endorse the results of the election.

“We cannot take ownership of the result that is going to be announced because of the opaque nature of this last phase of the general election,” said one of the commissioners Juliana Cherera, the vice-chairperson of the IEBC, without providing further explanation.

Announcing the result after the breakaway, Chebukati said he had been intimidated and harassed.

“I took an oath of office to serve this country and I have done my duty in accordance to the constitution and the laws of the land,” said Chebukati.

Reacting to the announcement, president-elect Ruto congratulated the IEBC for raising the bar.

“I want to say without fear of any contradiction that Wafula Chebukati is our hero,” he said.

He added: “There were predictions that we wouldn’t get here. But because there is a God in heaven, we got here.”

This was the first time Ruto had run for president. He has served as deputy president for 10 years, but fell out with President Uhuru Kenyatta, who backed Odinga in the election.