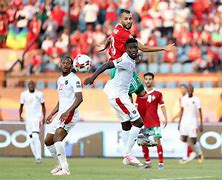 Ethiopian Football Federation (EFF) earned $68,000 (about K74 million) in broadcasting rights and gate revenue from 2023 Africa Cup of Nations (Afcon) qualifier against Egypt at Bingu National Stadium (BNS) Thursday.
The figure is slightly above what Football Association of Malawi (Fam) realised in gate revenue during the Flames match against Ethiopia at the same venue last week.
However, Fam is yet to announce how much was realised in broadcasting rights for the match against Ethiopia.
According to details, which Ethiopian FA posted on its official website, the total revenue for the match was $109,000 (K119.9 million).
A total of $54,000 was realised after they sold the rights to 30 televisions stations and 120 commercials.
In addition to the ticket sales, $55,000 was realised from the 22 billboards that were available at BNS during the match.
“In Malawi, $36,000 is earmarked for stadiums, vehicles, administrative expenses, police and security forces, medical services, stadium lighting and marketing,” reads part of the information on EFF official website.
EFF Communications Director Abrham Gebremariam confirmed that the total gross revenue was $109,000.
The match between Ethiopia and Egypt was beamed live on SuperSport just like the match against Malawi.
Out of $36,0000, EFF paid $5,340 (K5.8 million) to Fam for match organisation.
Fam General Secretary Alfred Gunda did not answer his mobile phone yesterday.
The match between Flames and Ethiopia at the same venue grossed K72.7 million in gate revenue.
A total of K53 million was a net revenue after expenses amounting to K19 million.
While Fam is busy blowing it is own trumpet for getting K72 million gross revenue, Ethiopian FA made huge profits by playing in Malawi.
A total of 20,000 spectators paid to watch the match between Ethiopia and Egypt according to the Ethiopian FA.
By being the hosts, EFF was also responsible for all match details including match officials.
Sports analyst George Kaudza Masina said Fam should learn from EFF.
“Football is big business, we need to learn from how Ethiopia did. They played the game away from home but they made profit,” Kaudza Masina said.
After a 2-1 loss to Malawi, Ethiopia recovered in time and stunned Egypt 2-0 at the same venue.
All the three teams in Group D have three points after Match Day Two but Ethiopia top the group on goal difference.
The Flames, who lost 1-0 to Guinea, are second.