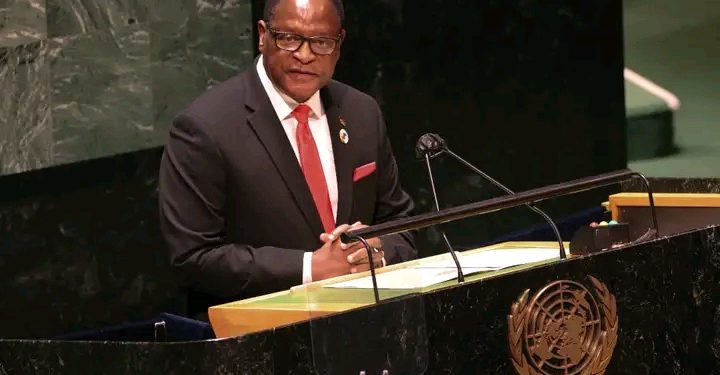 Malawi President Dr Lazarus Chakwera who doubles as Chairperson for the Least Developed Countries (LDCs) has called for global support towards LDCs if they have to realise their development aspirations.

In his keynote address at the UN Headquarters in New York, United States of America, on Thursday, President Chakwera called for the adoption of the Doha Programme of Action for LDCs saying it offers a recovery path for the world’s most vulnerable countries.

He expressed worry that while the least developed countries are facing challenges including those triggered by climate change, some developed nations are punishing them further by travel restrictions and blockage to global markets due to COVID 19.

“The current global context demands a collaborative, collective and courageous response. It demands the adoption of the Doha Programme of Action, for it is our best opportunity for charting a recovery path for the world’s most vulnerable countries. Action is our only hope,” said Dr Chakwera.

“We need this programme because it also contains measures for making internet access universal, for diversifying our economies, for increasing our exports and trade,” added Dr
Chakwera.

President Chakwera took the opportunity to explain that his country is a case in point, for it faced devastation in 2019 after being hit by Cyclones Idai and Kenneth.

“And while these wounds are still fresh, we have just been attacked again by Tropical Storms Ana and Gombe in the last seven weeks, leaving a trail of destruction and death.

“It is happening while we as LDCs are already choking from the socioeconomic devastation caused by Covid-19 pandemic, which has increased poverty levels in our countries by 35% in the past two years, unsustainable debt burden racing towards $1 trillion mark,” lamented Dr Chakwera.

Speaking earlier, UN Secretary-General, Antonio Guterres, expressed commitment of his office to lobby for increased funding towards the LDCs.