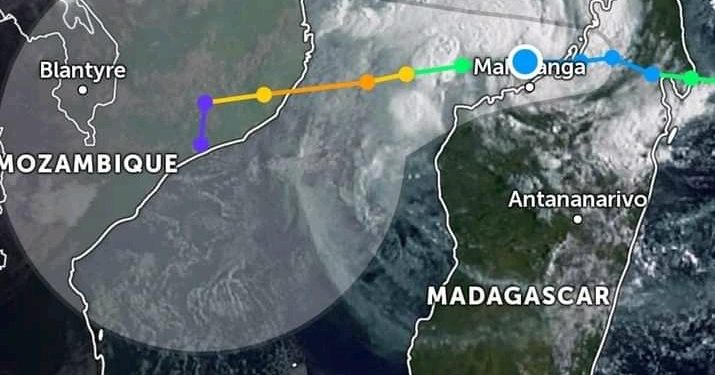 Ministry of Natural Resources and Climate Change through the Department of Climate and Meteorological services (DCCMS) has warned Malawians to stay alert as Tropical Storm GOMBE s expected to enhance rainfall over Malawi.

DCCMS released a public notice on March 8, 2022 informing the public that the Tropical Storm GOMBE has developed in Indian Ocean and as of yesterday March 8, 2022 it landed over Madagascar and was moving westwards at the speed of 8kilometers per hour.

It has been noted that the weather models are indicating that GOMBE is expected to continue moving westwards and intensify as it enters the Mozambique channel by today March 9, 2022.

“The storm is likely to make landfall over the Mozambique coast by Friday and enhance rainfall over Malawi.

“DCCMS will continue to monitor the movement and strength of GOMBE and it will communicate on any potential impacts on Malawi weather to the nation accordingly,” reads part of the statement.

Few days ago, acting director of DCCMS Lucy Mtilatila advised Malawians to follow weather updates from the department to prevent further damages of property and loss of life as rains beingsomeone experienced in some parts of the country are likely to continue.

According to DODMA, as of February 1, 2022 the previous Tropical Storm Cyclone Ana affected 800, 000 people in 19 councils, 33 people were confirmed dead and 20 were missing.