by Chaweya Mzembe
in Environment, National
0 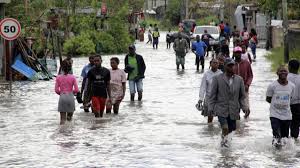 BLANTYRE, MALAWI — Malawi has declared a national disaster in areas hit this week by Cyclone Ana, which killed at least 19 people in the country and also caused scores of casualties in Madagascar, Mozambique, and Zimbabwe.Malawi’s President Lazarus Chakwera appealed Wednesday for urgent assistance for an estimated 50,000 families left homeless by the storm’s heavy floods. The situation is set to worsen with more rain expected Thursday.

The declaration follows a preliminary assessment Wednesday from the Department of Disaster Management indicating that more than half of the country’s 28 districts have been affected.

The hardest hit districts include Chikwawa, Nsanje, Mulanje and Phalombe, where roads have been cut off and bridges washed away.

Chipiliro Khamula is spokesperson for Department of Disaster Management Affairs.

“For Chikwawa, the M1 Road has been cut off at Thabwa and Nchalo, and a number of TA’s [Traditional Authorities] have been heavily affected,” he said. “For instance, Ngowe, Mlirima, Lundu, Kasisi and Maseya. With respect to Nsanje, a number of households are feared to be trapped by floods.”

The government says although some humanitarian partners already have started providing relief, more assistance is needed to meet the increasing number of affected people.

The thousands of displaced say they lack food, clothes and shelter.

In this image made from video, people walk on a road swept by flooding waters in Chikwawa, Malawi, Jan. 25, 2022.

Paul Turnbull, country director for the World Food Program (WFP) in Malawi, told VOA the WFP is getting ready to start providing aid to flood victims.

“We will be helping with DODMA, the disaster management administration, to provide food or cash to people that are in need. We will be able to provide some logistical support we have; some vehicles that can work even some of the muddier road conditions,” he said.

Turnbull says currently, the WFP is making its own assessment of the situation.

“We expect the results of those assessments to be coming out early next week. At the moment, we have provided a boat, and UNICEF has also provided a boat to help with search and rescue,” he said.