Flames kit man rewarded with a plot and building materials

As more stakeholders continue pledging support to the team 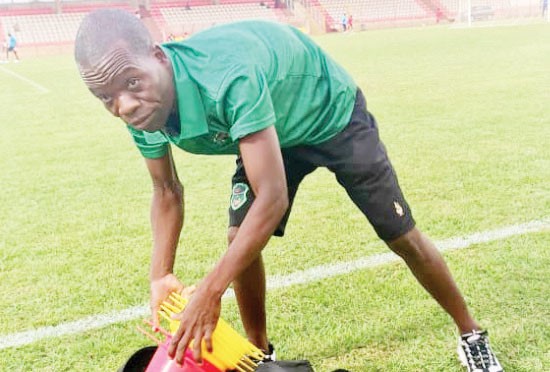 Quick Point Construction has rewarded Flames’ long serving kit master Richard Justin Zawazawa with a 15 by 30 plot in Lunzu and 2,000 cement blocks plus 50 Iron Sheets.
Nicknamed ‘Dinho’, the 47-year old man came to the limelight when he, together with Chimwemwe Idana and Gomezgani Chirwa, left Malawi for Cameroon and his pictures taken at Chileka International Airport were posted on the Football Association of Malawi Facebook page.

Many people mocked him saying he was going to Africa Cup of Nations as Malawi’s Traditional Doctor (Nsing’anga).
This was made worse when Malawi defeated Zimbabwe before holding Senegal to progress to the Round of 16, a development which convinced some Malawians that ‘Dinho’ was the reason behind the success.
The ridicule forced FAM to release a video in which they showed how hectic his job as a Kit Master is. The video, released before the knockout game against Morocco, was aimed at stopping the mockery.
But little did the social media users know that the mockery was a turning point into Zawazawa’s life, who, upon the team’s return to Malawi from Cameroon, was rewarded with a plot from Quick Point Construction and smartphone from Airtel Malawi Limited.
Speaking during the presentation ceremony, the Construction’ Managing Director Christina Chikalimba said her company decided to reward Zawazawa after seeing how he was mocked on social media by those who never considered him a Kit Master.
“When we saw the trolls on social media, we thought of doing something to this man. We were not happy with how he was mocked but we had no powers to stop them but when we sat down, we decided to reward him and the best gift was a 15/30 plot in Lunzu,” she said.
She also added that apart from the plot, Zawazawa will get 2000 Concrete blocks, 50 Iron Sheets, 50 bags of cement, an architectural expertise and a free foreman to be working on the construction site.
She, however, pleaded with other well-wishers to come forward and assist in finishing the project, saying whatever her company has donated will not be enough to complete the house.
“This is just something little from us but we believe we can do more. I don’t think this will be enough to complete the project so we are pleading with other well-wishers to contribute something so that the project is completed,” she said.
Zawazawa is a family man with a wife and five kids and he stays in BCA.