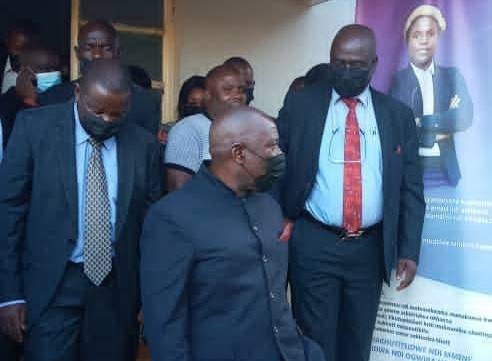 National Oil Company of Malawi (NOCMA) acting Chief Executive Officer Helen Buluma has revealed that she was told she would be given US$500,000 (about K410 million) if she corruptly awarded contracts to companies favoured by the then Minister of Energy Newton Kambala.

Buluma made the revelations when testifying at Lilongwe Chief Resident Magistrate Court in the case in which Kambala, Alliance for Democracy president Enock Chihana and former presidential aide Chris Chaima Banda are accused of interfering in the fuel procurement process at NOCMA.

As the bidding process for the fuel supply contracts was still in progress, Kambala approached Buluma and asked that contracts be awarded to Finergy, Orex and Trafigura.

According to Buluma, Kambala claimed that he had power to make sure that Buluma was taken care of even if she were fired.

“He said he would defend me but if that doesn’t happen, he would advise the suppliers who won the bids to give me $500,000,” said Buluma.

The NOCMA acting chief told the court that she refused to flout procedures.

In response, Kambala warned Buluma that he had the powers to cancel the tender process or instruct Malawi Energy Regulatory Authority to block the procurement process.

As NOCMA continued with the process of identifying successful bidders, Kambala wrote NOCMA Board, suspending the process of evaluating the bids. The Minister claimed that there had been complaints from bidders. But the NOCMA board told Kambala that it met on 2 December, 2020 and unanimously agreed that the management should proceed with the evaluation of the bids.

Tags: BulumaNOCMA CEO Buluma claims to have refused a 410 million bribe from Minister