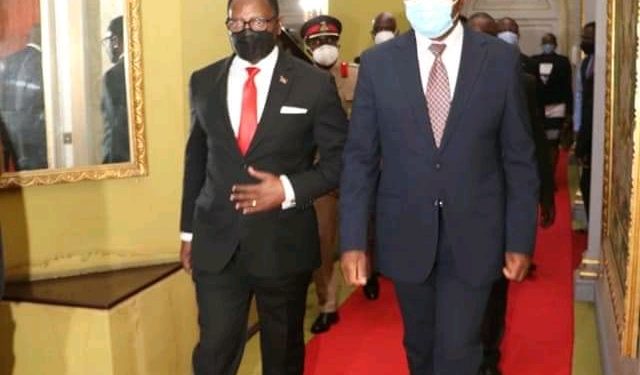 ✍️ Wolemba Prince Mandalasi
_________________________
The Southern African Development Community (SADC has commended Malawi, South Africa and Zimbabwe for pledging to provide food in order to alleviate the suffering faced by internally displaced persons in the Cabo Delgado Province in Mozambique.

This is stated in a communiqué of the extraordinary summit of heads of state and government of SADC which was hosted by Malawi today.

The summit was held to review the progress of the fight against terrorism in Mozambique’s Cabo Delgado where insurgents have staged attacks since October 2017. The violence has left over 3000 dead and more than 800,000 displaced. According to reliefweb, over one million people face hunger due to the conflict.

The SADC communique posted on the organization’s website today, says Malawi is among countries which have pledged to provide food to Mozambique.

“Summit commended acts of solidarity exhibited in the form of food pledges made by the Republics of Malawi, South Africa and Zimbabwe in order to alleviate the suffering faced by the internally displaced persons in the Cabo Delgado Province in Mozambique,” reads part of the communique.

Leaders during the summit considered the report of the Organ Troika Summit plus Personnel Contributing Countries (PCCs) and the Republic of Mozambique held on 11 January, 2022 and commended the SAMIM leadership and the troops for conducting successful operations and for the achievements recorded since the deployment of the Mission in July 2021.

They also hailed Member States that have provided personnel, equipment and financial support, as well as making additional pledges towards the deployment of the SADC Mission in Mozambique.

“Summit commended the SADC Region for its unwavering commitment to peace and security, and for using its own resources in addressing and combating terrorism in Cabo Delgado, which is a unique precedent on the African continent,” reads part of the communique.

SADC leaders during the summit today
According to the communique, SADC leaders noted that there is good progress made since the deployment of the SADC Mission in Mozambique.

The summit extended the mission’s mandate with associated budgetary implications and SADC will continue to monitor the situation going forwards.

The summit also approved the Framework for Support to the Republic of Mozambique in addressing terrorism which outlines, among others, actions for consolidating peace, security and socio-economic recovery of the Cabo Delgado Province.

Speaking when he opened the summit this morning, President Lazarus Chakwera who is also SADC leader said the remarkable progress made by the SADC mission in Mozambique has brought renewed hope to affected persons.

Chakwera has since urged SADC countries to stick together and not to in the fight against the insurgents.

“Our approach to this mission must continue to multidimensional and comprehensive, it must not only focus on neutralizing the threat but must also have a post conflict plan to rebuild,” said Chakwera.