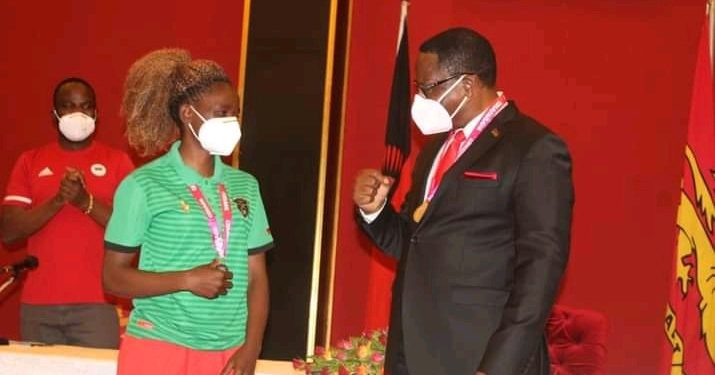 President Dr Lazarus Chakwera says the Malawi Women Football Team popularly known as the Scorchers deserve much support for making Malawi proud as they have made it in history through teamwork.

Dr Chakwera was speaking at Kamuzu- Palace in Lilongwe when he invited the Scorchers to congratulate them for their spirited performance at the just-ended Women Cosafa Championship in Port Elizabeth South Africa.

“It is encouraging to note that the team took the whole nation to the finals through teamwork. I hope that all Malawians will emulate the Scorchers. It can be easy to develop the new Malawi by collectively working together.” Dr Chakwera said.

Captain of the Scorchers, Madyina Nguluwe, hailed the President for inviting them to State House saying, “This is a morale booster.

“With your support and resources made available we are ready to continue putting Malawi on the international map,” Nguluwe said.

Nguluwe also highlighted some of the challenges the women team faces including lack of sponsorship when preparing for major tournaments.

She also appealed for employment opportunities in government institutions including the Malawi Defence Force (MDF), Malawi Police service (MPS) and the teaching profession among others.

Taking his turn, Minister of Sports, Ulemu Msungama said it is pleasing to note that many sports disciplines in the country are doing fine in most of the tournaments. He hailed the President for inviting the team saying this will rejuvenate the players to do better in future assignments.

He said: “The team has done Malawi proud as it has reached the finals, beating South Africa for the first time and also won three games in a row.”
Msungama also urged the private sector to assist the government in promoting sports in the country so that Malawian teams perform better in international assignments.

Malawi will be going straight into camp in preparation for the 2022 Women AFCON qualifier against Zambia.