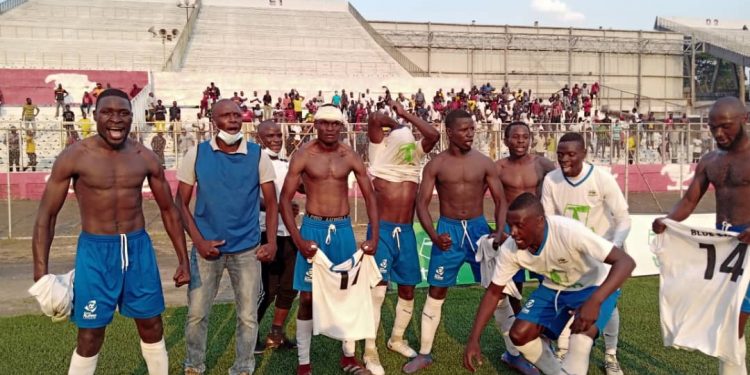 As people were busy enjoying themselves at Sand Music Festival in Mangochi, Police officers from area 30 took it to Kamuzu Stadium Blantyre.

The Cops danced and celebrated after the mission of arresting and putting behind bars the Salima Sugar workers became successful.The workers were loitering along Blantyre City putting businesses in the commercial city to a stand still.

The area 30 outfits produced a superb performance to make sure the mission for them is accomplished. From the word go,the Eagles were first on the ball and aggressive when attacking, no wonder Gilbert Chirwa found the back of the net within 12th minute.

The Nomads who were hoping for a title glory reacted through Vincent Nyangulu at 16th minute, but few minutes later Chifuniro Mpinganjira scored the second for Eagles before Gilbert Chirwa sealed his brace of the day.

First half ended Cops leading by three goals to one. Second half both teams started on a slow not, but it was again the men in uniforms who at some point launched the attack through, Gaddie Chirwa, Chifuniro Mpinganjira, Laurent Banda,Gilbert Chirwa. Nomads defence looked porous and shaky as Yunus Sherrif, Peter Cholopi failed to stop Eagles who were flying high.

Blue Eagles FC defence comprised of Jacob Robert, Ganizani James,Chisomo Chilasa and Onesimo Mbendera stood firmly and made sure the gates were completely closed to prevent the Salima Sugar workers from finding a space to escape the lawful custody.

Second half produced no goals as now the Nomads started playing containment football. They just sat in their own half to avoid conceding more goals as Eagles were all over displaying good football, passing and supporting.

The win has helped Blue Eagles FC escape relegation from the elite league, as in Karonga, Chitipa United failed to avoid the chop despite winning two goals to one over Redlions FC. Eagles have finished on position 13 with 32 points tied with Chitipa United only goal difference’s separated the two.

Gerald Phiri Snr hailed his boys for the brilliant performance today, saying his boys followed what he told them to do,scoring early goals.

“We have to come up with beautiful strategies next season as there were many problems that led to the downfall of the team,but let us first celebrate the victory”, He added.

” It is sad that we have lost the game the time we wanted it most”,. Said Bob.

Gilbert Chirwa was voted man of the match. Blue Eagles FC win today has also helped Nyasa Big Bullets to retain the title before winding up the fixtures hence Bullets and Blue Eagles supporters danced together the Songs as if they were at the Sand Music Festival.