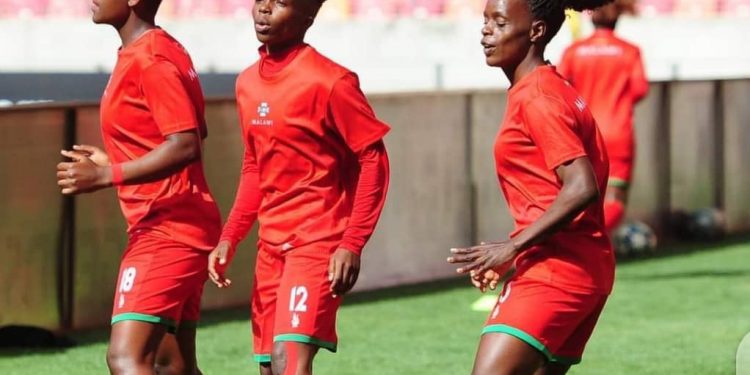 The Scorchers completed their group A matches in this year’s COSAFA Women’s tournament taking place in Port Elizabeth-South Africa with a win over the highly spirited Portuguese Colonized side Angola at Nelson Mandela University Stadium.

Malawi Women’s national team kick-started the game on a high note against Angola baring in mind that it was a must win for them to increase their chances of progressing into the knockout stages, however as it has been the case in previous games, Malawian attackers,Asimenye Simwaka,Fazila Chembekezo,Limbikani Chikupira failed to convert the scoring chances they created into goals.First half ended in a goalless draw.

Limbikani Chikupira scored scorchers first goal at 67th minute in the second half before Madyina Ngulube captain of the side added the second on 81st minute. MaCnelbert Kadzuwa made two changes including goalkeeper,replacing Samir Amidu with Ruth Mhango who was a bit dicsplined and well shielded by the defence as she came out with a clean sheet.

In another group A final game at Nelson Mandela Bay Stadium involving the defending champions Banyana Banyana and Mozambique ended three goals to one favouring the host.

It was an entertaining match as both teams displayed good football and kept on attacking each other but Mozambique defence was solid in the first half and in the first minutes of the second half denying the host to take shots at the goal.South Africa attackers also lacked killer punches upfront as the Scorchers, wasting many chances.Banyana Banyana scored first at 56th minute and Mozambique equalized through their captain Cina Manuel who scored with a powerful header at 65th minute few minutes later South Africa were back on the lead through Melinda Kgadiete who scored from a well taken free kick by Mamelo Mokhabane which went straight into the 18 yard box and Mozambique defence failed to clear the danger,she easily slot it into back of the net,at 79th minute Sibulele Holweni added the third for the host after taking a rebound from Mokhabane free kick which had hit the upright of Mozambique goal.Mamelo Mokhabane was the architect of the two goals for the host with her well taken free kicks, no wonder after the game she was voted player of the match.

The win for South Africa has taken them through to the knockout stages as they have finished as leaders of group A with seven points while Malawi has qualified into best runners-up deciders, waiting for results of Tuesday’s games in other groups to be confirmed of playing in knockout stages despite their two nil comfortable win over Angola on Monday.

Malawi has finished this year’s COSAFA Women’s Championship group A on number two with six points from three games,they lost to Banyana Banyana in their opening game on 28th September, 2021 by two goals to one,before thrashing Mozambique by three goals to two,in a game in which they came from behind on 1st October and scorched Angola on 4th October by two goals to nil.

Malawi has managed to score six goals and letting in four collecting six points from the maximum nine points.