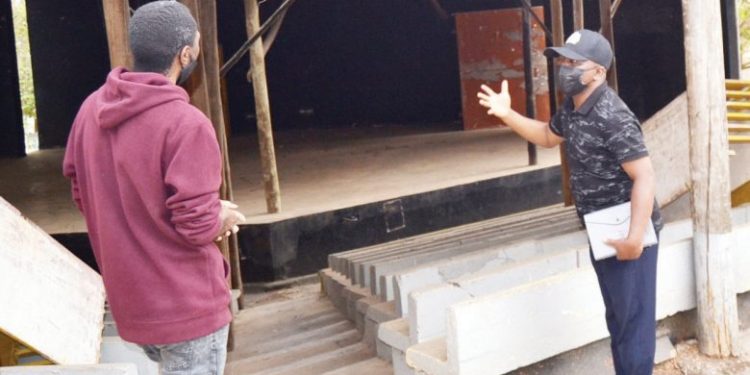 Usi first visited BCC, which is still under renovation having been ransacked by thieves in 2011.

The once mighty entertainment mecca is still in a sorry state despite renovations being made to the auditorium, among other areas.

However, the renovations are moving at a snail’s pace despite the contractor being given part payment for the current phase.

The minister was left disappointed after he found that the contractor was not there.

The brick wall fence, which would have progressed by now, is still way down and this did not go down well with the minister before he engaged some of the officials looking after BCC.

Usi also expressed disappointment with the state of the amphitheatre, which is yet to be rehabilitated.

The minister also toured Chichiri Museum, where he appreciated some of its services.

“I just thought I should visit these places since I was in Blantyre. I am disappointed with what I have seen at BCC. We could have been at an advanced stage by now. Artists should use this place but there seems to be no progress. Our mindsets need to change for sure,” Usi said.

He said he would make necessary moves and engage players to make sure that there is progress at BCC.

“The contractor was given part payment and, with that, there would have been progress but to find no-one working and with nothing to point at is something that I cannot tolerate.

“We need to make progress. Tonse Alliance government led by President Lazarus Chakwera and his vice Saulos Chilima is focused on development,” he said.

At museum, Usi appreciated some of the historical artifacts which, he noted, need new breath.

“The museum is rich in artifacts but there are some that need new breath. We need to revamp the museum so that it starts attracting people. There is so much that we can do and we need to work hand in hand,” Usi said.