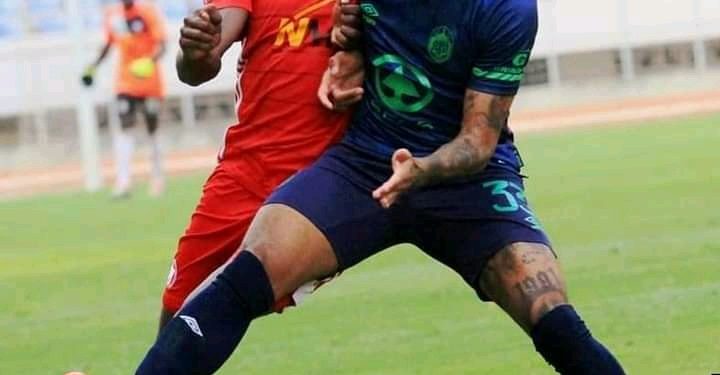 Nyasa Big Bullets have been booted out of the CAF Champions League preliminary stage after going down 3-1 to Amazulu FC at Bingu National Stadium on Saturday afternoon to lose 3-2 on goal aggregate.

Despite taking a one-nil advantage into the second leg, Bullets never showed up as they were trounced by the visitors who were attacking through the left wing operated by Luvuyo Memela.

Head coach Kalisto Pasuwa made two changes to the side that won the first leg as he replaced Yamikani Fodya and Chiukepo Msowoya with Nickson Nyasulu and Hassan Kajoke who did not feature it in the first leg due to an injury.

Bullets found themselves down just after four minutes into the match when Sankhani Mkandawire handled the ball inside the penalty box.

Bonginkos Ntuli stepped up to slot the ball past Chimbamba, 0-1.

One turned into two. Luvuyo Memeya dribbled past Nickson Nyasulu before sending a dangerous ball into the box which was flipped into the net by Ntuli who was unmarked in the six-yard box, 0-2.

Sensing danger, Pasuwa had to sacrifice Chimango Kayira for Msowoya in the 19th minute to increase his attacking options.

The visitors looked nippy and full of energy and were always first on the ball as Bullets struggled to cope with Memela’s pace especially to the left flank where he was operating from.

Pasuwa had to make another substitution in the 31st minute when he brought in Meshack Selemani for MacFallen Mgwira.

It was about attacking with the hope of reducing the affairs but to unlock Tapelo Xoki and Sandile Khumalo’s defence proved too difficult for Pasuwa’s men.

The hosts had a chance in the final minutes of the half but Veli Mothwa produced a save to deny Msowoya from finding the back of the net.

In the second half, Alick Lungu replaced Nyasulu whilst Makhehleni Makhaula replaced Philani Zulu in defense.

Bullets were back in the game with a fantastic goal through a freekick from Henry Kabichi in the 48th minute after a foul by Khumalo on Msowoya, 1-2.

But just when Bullets thought they were now taking the game away from the visitors, Siphelele Mthembu hammered the final nail on the host’s coffin.

Another brilliant work from Memela saw him dribbling past Gomezgani Chirwa, Miracle Gabeya and Sankhani Mkandawire before sending another low but dangerous cross into the box to Mthembu who had plenty of time before deciding to shoot at goal and put the ball into the back of the net, 1-3.

This goal was a blow to Bullets who only needed a goal to progress before conceding the third goal.

Knowing that a victory was certain, Amazulu FC Coach Ben McCarthy brought in the likes of Tsepo Masilela and Lehnonolo Majolo for Nkosi and Kgotso Molepo whilst Pasuwa introduced Precious Phiri for Kajoke.

In the 74th minute, a sole attempt from Lungu nearly went in when goalkeeper Mothwa failed to clear the ball away from his area but he was luck to survive as the ball came off the woodwork.

Moments later, Mothwa was called into action again to deny Msowoya from scoring with his powerful shot being saved for a corner and with nobody inside, Amazulu FC survived the scare.

With the clock ticking very fast, the onus was on Bullets to score two quick goals in order to remain in the competition but ‘Usuthu’ were tactically good and frustrated the hosts with delaying tactics.

Despite pushing for the goals, Bullets were unable to reduce the arrears and got eliminated. They exit the competition in the preliminary stages of the competition for the second time in a row.

Speaking to the media after the ordeal, Pasuwa rued defensive mistakes by his players to give away cheap goals to Amazulu FC.

“We didn’t show up for the party. Those childish mistakes at the back have cost us this game and at this level of a competition, you cannot afford to do these kinds of mistakes so we are out