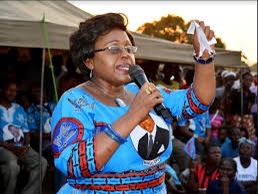 Estranged Secretary General (SG) of the Democratic Progressive Party (DPP), Greselder Jeffrey – today cried before the High Court judgeWilliam Msiska, as she asked for forgiveness in a case in which the Minister of Youth and Sports, Ulemu Msungama sued for defamation

The “Mfiti Yayikazi” – as she once called herself during a DPP campaign rally at Njamba Freedom Park in Blantyre – is being accused of defaming Msungama during the campaign ahead of the 2019 tripartite elections.

Greselder Jeffrey- was remorseful and begged for forgiveness
The former member of Parliament for Nkhotakota South East alleged that Msungama had raped his cousin and that the people of Lilongwe City South East should not vote for him.

In court, a video clip was played in which the estranged DPP Chief Executive Officer was captured telling people not to vote for Msungama as he had raped his own cousin that the case was in court, among other things.

To show her remorse, Jeffrey cried and knelt down, asking for forgiveness from Msungama and the judge.

Defence lawyer Gilbert Khonyongwa said they will write the plaintiff on the next course of action.

Khonyongwa said Msungama is at liberty to choose whether he would want the apology published or not.

Msungama said he would consider forgiving Jeffrey. However, he warned other politicians to refrain from insulting one another all for political power.

Judge William Msiska of the High Court of Malawi has granted the two parties an outside court settlement order and that they should report back once all is done to close the case.