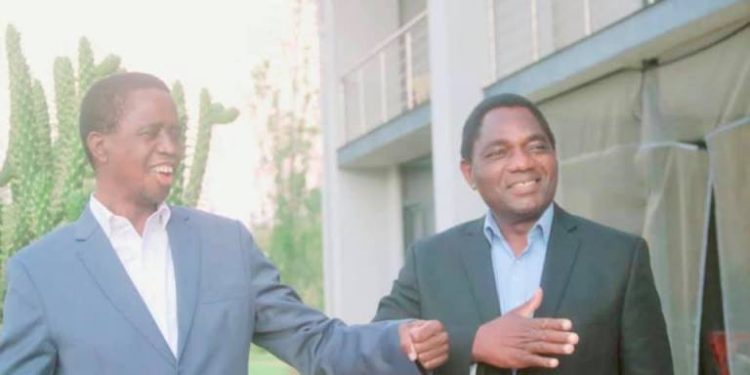 Hichilema of the United Party for National Development (UPND) won the August 12 election with 2,810,777 votes while Lungu of the Patriotic Front emerged second with 1,814,201 votes.

Lungu said he will comply with the constitutional provisions for a peaceful transition of power.

“I would, therefore, like to congratulate my brother, the president-elect, His Excellency, Mr Hakainde Hichilema for becoming the 7th republican president,” said Lungu.

Hichilema said the meeting centered around the betterment of Zambia and its future.

“We remain committed to ensuring a united and developed Zambia for all.

“We will endeavor to work round the clock and indeed ensure a country everyone can call home because what divides us is smaller than our Country’s aspirations.

“I Thank Your Excellencies President Lungu, President Banda, President Kikwete and President Koroma for showing that Africa is indeed blessed,” Hichilema wrote in a Facebook post.

Lungu became President of Zambia in 2015 after the death of His excellency, President Michael Sata.

In 2016, he was given a fresh mandate for Five years after winning the presidential election

In his Facebook post, Lungu thanked the Zambian people, for giving him an opportunity to be their president.

He said: “I will forever cherish and appreciate that authority you vested in me. All I ever wanted was to serve my country to the best of my abilities, and together with you, we indeed scored in many areas.

“Of course, there were challenges on the way, but what I appreciated most was your support during the tough times.”