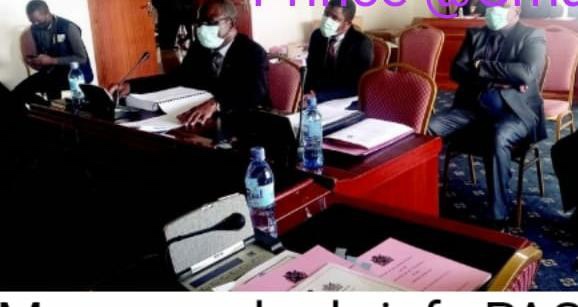 The PS flanked by the ministry’s officials appeared before the Public Accounts Committee (PAC) of Parliament to answer questions on 2018/19 audit queries, including giving an update on the state of Covid-19 vaccines in the country.

Mwansambo briefs PAC members during meeting
When the committee inquired how many patients were referred abroad using K645.8 million in the year under review, he told them that he did not have the information but he would provide it later.

Said Mwansambo: “When we get resources budgeted for referrals, most of it is sent to South Africa or India where we refer patients, there’s some resources for air tickets and visa fees paid locally but we have informed the Auditor General to accompany us to audit the payments abroad.”

However, he admitted the annual recurrence of audit queries due to unsupported documentation attributing it to a lack of digitised system as paper is always bulky and prone to missing.

The audit report on the year under review exposed some 11 spending activities without supporting documentation and PAC, during the last committee meeting challenged MoH to bring answers for accountability.

However, the committee doubted the authenticity and adequacy of the submitted documented evidence on foreign medical referrals, as such reprimanded the ministry to go back to the drawing board to bring sound evidence.

“Over half a billion is a substantial amount of money, to use that money without proper documentation raises eyebrows, as PAC we want to see that this issue has been solved by bringing relevant supporting documents,” he said.

Other expenses without documentation that raised questions, included goods worth K128.9 million which were not recorded in the stores ledger, K61.7 million expenditure on fuel and K56.3 million housing allowance.