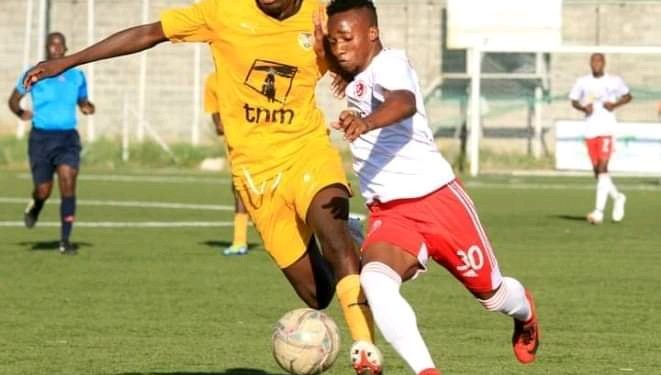 A strike in each half from Lanjesi Nkhoma and MacFallen Mgwira at Kamuzu Stadium on Sunday afternoon handed Nyasa Big Bullets a hard-fought 2-0 victory over Mighty Tigers FC to progress to the last eight of FDH Bank Knockout Cup competition.

Bullets were dominant in the opening minutes but they failed to unlock Boston Kabango’s led defence which kept on blocking every attempt made to frustrate the hosts.

However, a breakthrough finally came in the 20th minute when Selemani and Kaonga exchanged passes to find Nkhoma who just made a simple finish to beat Dalitso Khungwa in goal for Tigers FC, 1-0.

Bullets’ celebration was almost cut shot at the other end of the field when Kondwani Chilembwe observed Rabson Chiyenda off his line and the forward did everything right to release a thunderous shot but missed the goal sticks with just an inch, a relief to Bullets.

The hosts suffered a massive blow towards the end of the half when Nkhoma sustained an injury after he collided with Emmanuel Nyirenda and the youngster couldn’t finish the game as he was substituted for Chiukepo Msowoya at half time.

In the second half, Tigers took over from Bullets with some series of offensive play from Blessings Banda, Precious Chiudza, Chilembwe and Ganizani Anthony but Bullets’ defence stood firm to protect Chiyenda, who was the busiest in the opening minutes of the half.

Tigers nearly leveled in the 58th minute when a cross from Anthony was chested down by Chiudza before firing at goal but Chiyenda was equal to the task to produce a save for a corner which had no impact as Mkandawire cleared the ball away from his area.

Tigers made a triple substitution in the 60th minute when Trevor Kajawa brought in Johns Kanyumba, Mphatso Katsonga and Masiya Manda for Kondwani Chilembwe, Anthony Namwera and Ganizani Anthony to try to increase his attacking options.

Indeed, this change brought an imminent impact as the visitors invaded Bullets’ goal area and they almost found the equalizer in the 65th minute when Katsonga connected well Manda’s cross only to be denied by Chiyenda for another corner.

Sensing danger, Bullets assistant coach Mponda made a double substitution of Precious Phiri and Ben Manyozo for Selemani and Kansungwi.

Bullets were struggling to attack but whenever they launched a counter attack, it was trouble for Khungwa who made a brilliant save to deny Mgwira from scoring after a good work from Chirwa.

At 75th minute, Chiudza was replaced by Chikaiko Batson and Bullets kept on living dangerously but they were kept in the game by Chiyenda’s heroics who made everything possible to frustrate Kajawa’s men.

In the 83rd minute, Tigers squandered another goal scoring opportunity when Batson, Manda and Katsonga invaded Bullets’ goal but they failed to outsmart Chiyenda who produced yet another save for a corner.

The hosts were anxiously waiting for the final whistle whilst Tigers were racing against time to find the equalizer which never came as Bullete defended with everything to put one leg into the quarterfinals.

Bullets finally doubled their lead in the 90th minute in a brilliant fashion.

Individual brilliance from Idana saw the midfielder dribbling past three Tigers’ defenders before finding Mgwira who made no mistake by releasing a shot from outside the penalty box which was too much for Khungwa who could only collect the ball into the net, 2-0.

Bullets should have added third in the last minute of the additional minutes but Idana was slow to make a decision as he allowed Tigers FC players to regroup before making a clearance and that was all for the match.

Bullets are through and they will be waiting to see their quarterfinal opponent once the draw is conducted by Football Association of Malawi (FAM).