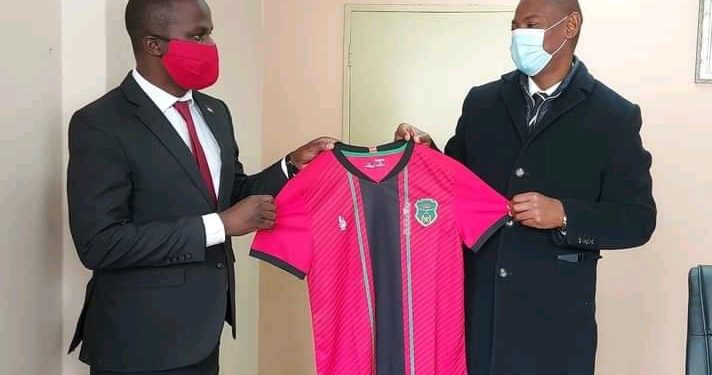 Football Association of Malawi (FAM) says flight complications due to Covid-19 have delayed the consignment of Flames replica jerseys from Vietnam by three months.

There has been a high demand for Flames’ replica jerseys since the Malawi national football team qualified for the 2021 Africa Cup of Nations finals in March leading to the sellout of the first consignment.

President Lazarus Chakwera (2ndR) greets Flames coach Meck Mwase while donning a national team replica jersey during an interface he had with the Flames in April to congratulate them for qualifiying for Afcon
Said Matola:  “The consignment has delayed due to flight complications as a result of the Covid-19 pandemic. But we hope to have the consignment in three weeks time.”

He also brushed off suggestions that the Flames’ poor showing at the Cosafa Cup could affect the sales.

“People wear the jersey because of the pride they have for the Flames and that is what has been inculcated.

“The Motto brand is a Malawian brand. The jersey is for national pride and the demand remains high,” said Matola.

However, football analyst George Kaudza Masina, who is also a marketer, said people always want to be associated with a winning brand.

He said: “The performance of the Flames at Cosafa is likely going to have a negative impact on the sales as most football followers do not want to associate themselves with the team when it is not doing well.

“But if the Flames do well in the 2022 World Cup qualifiers, it could boost the sales.”

In May this year, FAM bowed down to demands by some fans to introduce a cheaper quality of the Motto-branded replica jerseys.

This followed an outcry from a section of the fans that the replica jersey, which is selling at K29 500, is beyond the reach of most Malawians.