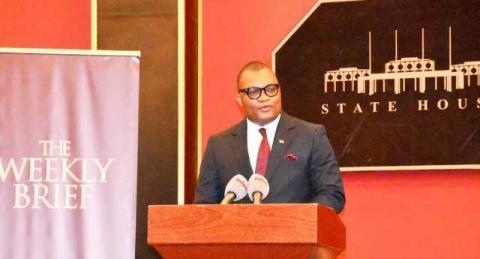 State House Press Secretary, Brian Banda has refuted reports that the salary for president Lazarus Chakwera has been hiked.

A recent report by Business Insider placed Chakwera among 15 African leaders with bloated salaries with Paul Biya of Cameron as the highest paid.

The report says that annually, Chakwera receives around 58 million Kwacha (74,300 US Dollars) representing 399 of the GDP Per Capita.

But Banda has dismissed the reports of the said hike and says Chakwera is a servant leader and that Malawians will decide if its of paramount to increase his salary.
.

Brian Banda says government has left the task of ensuring that people involved in misuse of Covid-19 funds face the law.

Banda says the whole issue now remains in the hands of police to see the matter come to it’s conclusion after the president initially ordered for a probe.

Banda says from the National Budget, there are some clauses meant to support the wealth creation which is inline with Malawi vision 2063