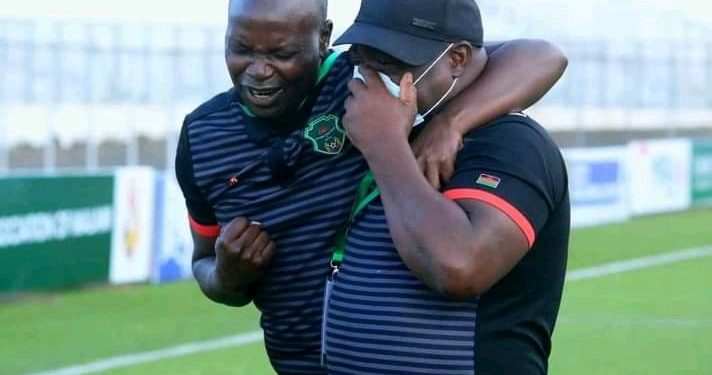 Reports indicate that the Football Association of Malawi (FAM) is taking unnecessary time to give Meck Mwase a full-time job as Head Coach for the Malawi National Football Team.

Mwase’s short term contract came to an end last December and was asked by FAM to take care of the team on interim basis from January this year until he qualified for 2022 Cameroon Africa Cup of Nations.

Malawi players hoist coach Mwase
The Flames will take part in the 2021 COSAFA games besides their involvement in World Cup qualifiers in a group comprising Cameroon, Ivory Coast and Mozambique.

Minister of Youth and Sports, Ulemu Msungama, told the local media that everything was in the hands of FAM officials at Chiwembe, Blantyre to fast track the process.

“FAM must give the ministry their plans regarding Mwase through the National Council of Sports. As government, we have no problems but the whole process starts with FAM.

“I should also point out here that Mwase needs some extra training for him to be confident in his job as he takes charge of the national team,” explained Msungama.

The delay is contrary to the remarks that FAM President Walter Nyamilandu Manda made after Malawi’s qualification to the AFCON after beating Uganda 1 nil at Kamuzu Stadium.

“The man is a hero. The last time we went to Afcon it was under a local coach Kinnah Phiri.

“We brought expatriate coaches, but they never delivered. It has taken Meck to achieve this feat within a year. We will be stupid to let him go. He has earned his contract,” remarked the jovial Nyamilandu.

Ironically, Mwase is still tied and cannot start making any plans regarding Flames’ preparation of the forthcoming games.

Former General Secretary at FAM, Dr George Kaudza Masina, told a local radio station that it was time for FAM to act swiftly in telling the nation the future of Mwase.

“It appears FAM never wanted Mwase. His qualification took them unawares. Government does not employ a national coach on its own. It all starts with FAM.

“It’s time for FAM to come out in the open and explain what happens next with Mwase,” explained Masina.