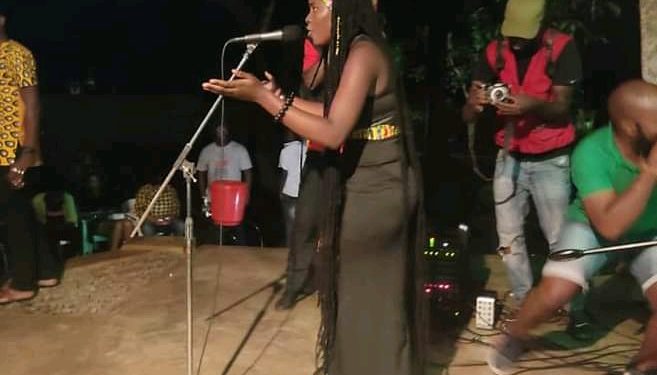 0
SHARES
75
VIEWS
Share on FacebookShare on TwitterShare on Whatsapp

Malawian singer keturah demonstrated to the audience at Jacaranda cultural Centre [JCC] in Blantyre that she is destined for greatness when she delivered a virtues performance during a private concert.

She arrived late but delivered a powerful set of beautiful African music that would conquer any audience in the world.

Featuring among others super DT on malimba and Anthony Supriano on percussions the audience which included other artists such as Sam Simakweri and filmmaker Shemu Joya, Keturah took them on a journey of her music.

Before performing a song the female artist who dressed in traditional wear would explain the story behind the song.

‘’Honestly I was nervous but later my spirit told me to step up and everything went on smoothly, it was all good,’’ Keturah said.

Keturah said that she believes that she is a teacher and an advisor and that through music she tells stories about Africa.

She also cited that when she sees girls’ marrying at an early age it pains her a lot, she said she want to see fellow women achieving their dreams.

The beauty about Keturah is that she sings from the heart and to her music is a tool for disseminating massages and tackling various issues affecting the society.

‘’ I do music that defines me, cultural music and it is all about healing someone using music,’’’keturah said.

‘’I have been heartbroken before and gone through a lot and so I want my music to mend the broken hearts,’’keturah said.