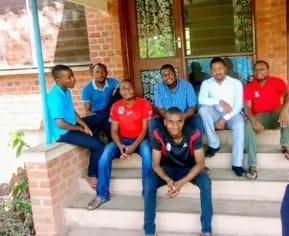 A ray of light has risen for youths in Malawi as a group of current and former major seminarians have geared up efforts to come up with an Electronic Magazine (e-magazine) that is aimed at tackling various issues germinating in the country.

Confirming the development, one of the board members Geraldo Bleza Malota who happens to be the author of a recently published book “Tales of a Sojourner” said as youths they are a new hope for the country.

He said: “As the youth, we are a new growth, we cannot only be but should be there as beacons of a new hope for a better tomorrow as we focus on tackling various germinating issues today.

“In this magazine, we will cover issues be it social, sports, entertainment, political, economic, spiritual and religious among others.”

Malota also said this is a chance to display their talent.

“This will also serve as a platform to show different talents that we have in store.”He said.

In a separate interview with one of the youths in Karonga District, Stephen Banda said the development has come in good time.

“Most of us today prefer to read from our electronic devices, so this e-magazine has come in a right time because the culture of reading from hard copies is slowly fading away.” He said.

The group members reside in all the three regions in Malawi, Northern, Central and Southern.

The group is scheduled to publish its first issue in May this year.