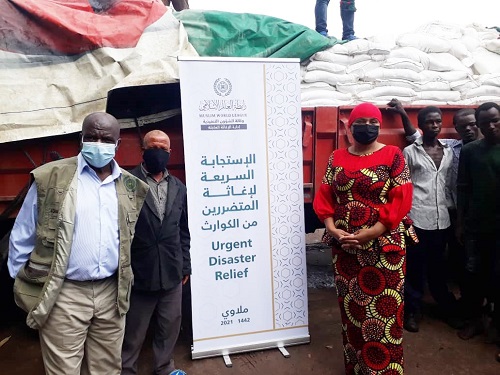 At least 2000 households affected by hunger in Chikwawa, Nkombedzi Constituency have benefitted from the maize flour donation, which their Member of Parliament (MP) Abida Mia, who is also Deputy Minister of Lands, distributed this week. Abida Mia donated the maize flour sourced from Muslim World League.

In an interview after the distribution, Mia said she felt duty-bound to assist her constituents in that way more so when authorities project lower yields in the Shire Valley due to the drought the region suffered in this farming season.

“It is during the time of great need like this that I feel obliged to get closer to my people and assist them in every way possible.”

The legislator further called on well-wishers to reach out to those affected in the shire valley.

Mia sourced the donation from the Muslim World League and during the distribution, she was accompanied by the organisation’s country representative, Noordeen Kaondo, who expressed satisfaction upon seeing that the assistance directly reached the affected beneficiaries.