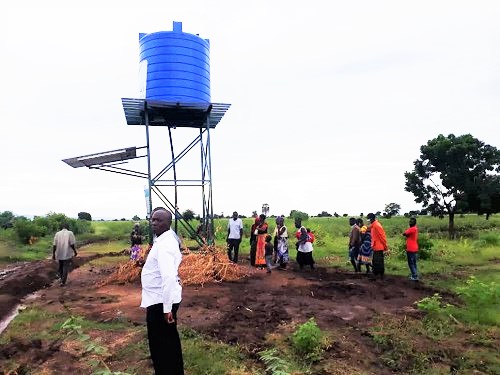 Member of Parliament for Chikwawa Nkombedzi Constituency who is also the Deputy Minister of Lands, Abida Sidik Mia, donated a solar-powered water tank to the value of K9 million at Thiransembe Irrigation Scheme in her Constituency to boost irrigation farming. The Member of Parliament sourced the donation from the World Muslim League to which she provided an additional 20 bags of cement for the scheme to construct the tower tank base.

The Chairperson of the irrigation scheme, Laison Kutacha, described the donation as “timely” and “one that will go a long way in bailing them out from the pangs of hunger.”
In an interview, Mia said that she has a duty of ensuring that her constituents have enough food all year round and aims to do this mostly through empowering them to be self-reliant and self-sufficient.

The irrigation scheme which is in Group Village Headman Msomo in the area of Senior Chief Ngabu, was previously assisted by World Vision with 2 solar-powered irrigation tanks, and now that their legislator, Abida Mia, has increased their capacity; they will be cultivating about 7 hectares of land.

It is projected that with this donation, the scheme will be making MK3.5 million kwacha annually as compared to MK1.7 million it realized last year.