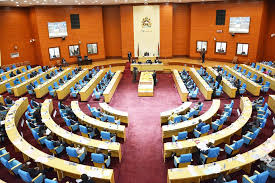 0
SHARES
98
VIEWS
Share on FacebookShare on TwitterShare on Whatsapp

Parliament on Thursday morning March 25, 2021 adopted a report presented by the environment Committee of the house which was seeking the go ahead to implement the long debated Salima-Lilongwe Water Project.

Adding voices to the debate on the Water project, MPs agreed to the implementation of the project with Mangochi South Parliamentarian Hon. Lilian Patel expressing concerns on how some approved projects by parliament get delayed in the process of implementation, while Zomba Central Constituency member registered worries on the sustainability of the project considering the capacity it will draw comparing to the flow of Shire river which takes its Water from the same lake. He further expressed interest to know if the project will offer portable water to residents at reasonable tariffs. On his part Kasungu South MP Hon. Simplex Chithyola Banda told the house that he believes the residents alongside the pipeline of the project like Salima, Mvera and Dowa will benefit from the same.

Taking his turn on the report, Member of Parliament for Dowa East who is also the Leader of the House, Honorable Richard Chimwendo Banda told the house that if the country is to develop then such big and huge projects must be implemented as they are to serve citizenry, adding that the purpose of the project is to make sure the City of Lilongwe doesn’t get out of Water supply. Chimwendo continued by telling the house that the project will also offer job creation.

The Salima-Lilongwe Water Project is being taken by Khato Civil, a Malawian company owned by Mr. Simbi Phiri.