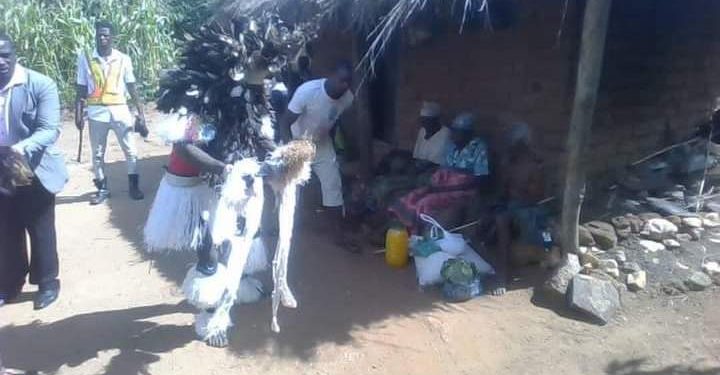 Members of Gulewamkulu cult at Mchotseni Village in Mwanza district pulled a surprise on Monday when they donated food items and Chingambwe to a visually impaired man.

Leader of the cult Morosoni Singireti told Malawi24 that he thought of organising the visit to Gogo Thamisoni after learning that the man is now suffering in his old age as his close relations are very poor and cannot afford to take care of him.

Among other items donated were soap, relish and his favourite smoking brand Chingambwe.

Members of the cult making the donation
In his remarks after he received the items, Thamisoni expressed gratitude to the cult and asked other well-wishers to emulate the same gesture.

He said the items now will ease the suffering he has is going through as his family has no food to share with him. He also said that its time now to be positive enough for national development.

On top of the items donated, the female members of the cult fetched water for the family and swept the compound.

Often times Gulewamkulu is known for causing havoc and panic among people, something Thamisoni said should change.

Thamisoni once served as a leader of the cult and left due to old age.