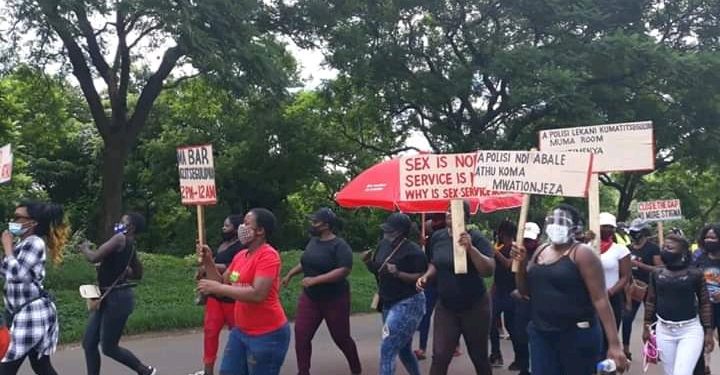 Female Sex workers in Lilongwe on Thursday morning, convened and made a public protest against a government decision to impose a night curfew and closure of bars which they say have serious economic implications on their lives.

Their protest was aimed at asking government to review the decisions and allow them to operate normally.

The protests were disrupted after the Lilongwe District Commissioner refused to receive their petition, forcing them to go to Lilongwe City Council instead.

Executive Director for the Female Sex Workers’ Association, Zinenani Majawa, says the on-going street protests in Lilongwe are also meant to bring to the attention of the public issues of that stigma related to sex work.

She, particularly, mentions police abuse of sex workers as an item high on the list. Majawa says police officers sexually abuse prostitutes when they are in the line duty after arresting them for a rogue and vagabond offence.

They further said that if they will involve law agencies such as the courts to intervene and protect their rights as them too have a right to survive.

Majawa also people oftenly portray sex works as a sin but it’s proffesion like any other job thus they ought to be protected as any individuals plying their trade.

Efforts to speak to the District commissioner for Lilongwe city as to why his office refused to receive the pertition proved futile as he was reported to be in a board meeting.

A Social Analyst Victor Banda commented that some of these rights needs to be reviewed and considered cautiously as prostitution is a taboo to the Malawian culture.

He however appealed to the authorities to ad well listen to their voice and take necessary measures to bring an amiance to their quests other than ignoring them.