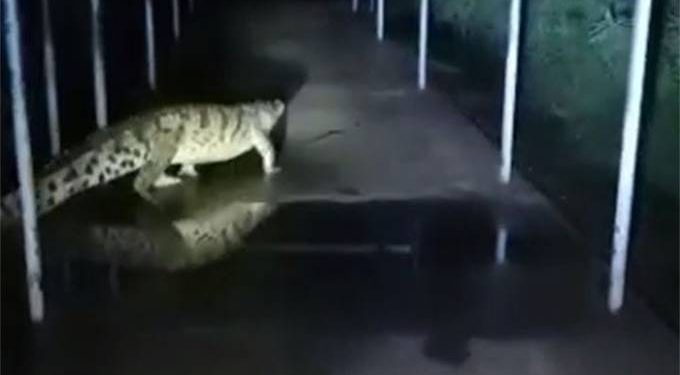 In a shocking development,  there was pandemonium at Chiredzi General Hospital on Monday after a stray crocodile was spotted in a storm drain at the health facility.

The publication has established that there was panic at the health facility after the crocodile was spotted at 4 am roaming around near the storm drain.

The humungous crocodile is alleged to have mysteriously crept into a male ward and spent the night among patients.

Officials believe the two-meter reptile used the flooded poor drainage system to swim all the way to the hospital before seeking refuge inside the medical facility.

Fortunately, the reptile did not attack anyone from the time it was spotted at around 4 AM until it was captured and translocated by a team from Zimbabwe Parks and Wildlife Management Authority(Zimparks).

“It was just a crocodile that was seen within the hospital area around 4am but it did not attack anyone. No one was injured. The situation was managed very well and the crocodile was taken by Zimparks and deposited in Chiredzi River,” Dr. Tarumbwa.

Tarumbwa called for improvement in the general security of key facilities such as health institutions in the wake of heavy rains that have been falling in the Lowveld.

“We thank God that the situation was managed bit a crocodile is dangerous even to a beast(cow) what more to a human being. I think there’s need to improve security at institutions like hospitals because there is a lot of movement caused by heavy rains that have been falling,” he said.

The incident was followed by superstitious claims that one of the male patients admitted in the ward was using juju. Chiredzi District Administrator and Civil Protection Unit chair  Lovemore Chisema however, rubbished circulating reports that the huge crocodile might be the work of juju.

“Heavy rains have been falling here for days and these animals(crocodiles) even also get confused sometimes so maybe it just strayed from a canal because of rising water levels. I don’t think there is more to it.