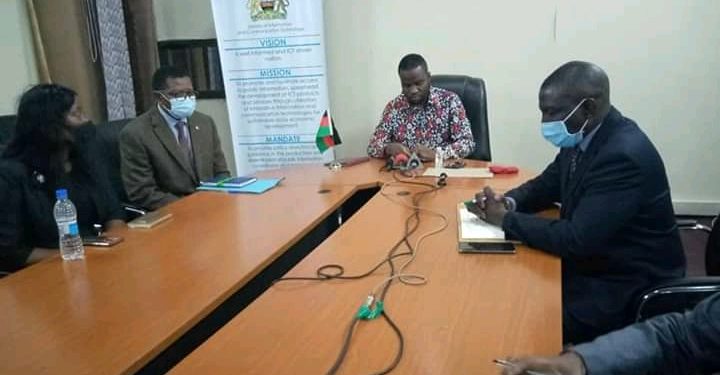 Minister of Youth and Sports Hon Ulemu Msungama is back from India where he went for a Knee and Lipomas surgery.

Speaking to the Media Tuesday night the Minister said while he was greatful to God that the two surgeries were successful, he is sad with some media reports that have been circulating
indicating that the Minister went to India for a cosmetic hair surgery.

Msungama said while he was not interested to respond to the Media reports he found it necessary to explain the truth about his medical trip.

The Minister said that he picked a knee injury in August of 2019 while playing social football with the Parliament Social football team. In the same year 2019 he referred the matter to his employer Parliament who had been working with MASM to get him the best treatment locally , unfortunately the treatment was not available locally up until last year when he was finally referred to India.

However the process of getting the treatment in India only materialised at the time he was appointed as a Minister.

The Minister said while he was preparing to go to India he was in contact with his Medical Scheme holders MASM on the possibility to extend his treatment to Lipomas which is on his shoulder and back of his head and was given a go ahead.

The Minister also said contrary to assertion that he wanted a cosmetic hair surgery around the bald part of his head, he does not need that surgery as he has always uses a Hair Fibre sprey to cover the bald area of his head.

The Minister went on to display to the Media how he makes his hair without the need for surgery.
According to MASM Regional Chair for the center Albert Mungomo MASM will foot all the medical bills for the Minister.

Hon Msungama was treated at Artemis Hospital in Delhi.