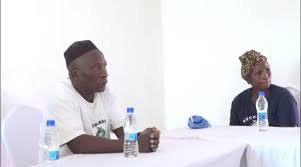 Ex-detainees and returnees, who were victims of the one-party government, have given government 30 days to pay them their dues, totalling K462 billion.

The group’s chairperson Sangwani Mkandawire made the demand during a media briefing in Lilongwe on Wednesday.

He said there are about 23 000 victims demanding K20 million each from government as compensation for atrocities they faced when Malawi was a totalitarian state.

Besides Mkandawire, other members include Griffin Kondowe, Life Sanudi, Alexander Msiska, Andrew Phiri, Patrick Johnstone, Unandi Banda and Margaret Banda. They said if they do not get a response within 30 days, they will hold vigils at President Lazarus Chakwera’s office.

Mkandawire (R) and other group members during the briefing
Reading from a prepared statement, Mkandawire said they have been writing government for over a decade during administrations of Bakili Muluzi, Bingu wa Mutharika, Joyce Banda and Peter Mutharika, but to no avail.

He said: “As victims, we are fed up with government’s continued delaying tactics. We are giving government one month. If we don’t get any tangible communication, we will have no choice but to go to the office of President and Cabinet.”

The victims claim that the Constitutionally-established National Compensation Tribunal selectively compensated politically-connected victims and the fund was depleted before all claimants could benefit.

But political commentator Humphrey Mvula, a former secretary general of the United Democratic Front, faulted the group for taking a confrontational approach.

He said: “Some of these people were still abroad when others were getting their compensations. They should use a consultative approach.”

However, Centre for Human Rights and Rehabilitation acting executive director Michael Kaiyatsa said the demands should be honoured.

He said: “This is a human rights issue. They are fighting for what is theirs and there is need for government to ensure that justice prevails on that.”

Chakwera stated earlier that his administration will establish a National Truth and Reconciliation Commission to oversee issues of previous disputes.