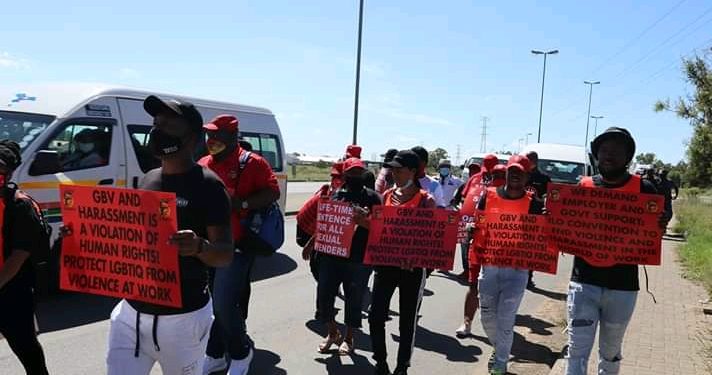 Police and Prison women in Thyolo today joined the rest of the world in commemorating 16 Days of Activism against Gender Based Violence campaign.

Speaking during the Solidarity March which started from Mangunda to Chief Nanseta’s Headquarters, Commissioner of police South Eastern Region Mrs Sekani Tembo said police women are alarmed by the increasing cases of gender based violence hence joining the calls to end the vice.

“Women are being beaten and maimed by their partners each and every day. It’s so shocking. Girls are being subjected to sexual violence. So, as police women, we have decided to raise awareness through this solidarity march. We need to end these attacks as women and children have rights too,” said Tembo.

She advised victimized women and children to report their perpetrators to the police to receive their justice.

“Some victims choose to suffer in silence at the expense of marriages. This is no time to hide pain and suffering. It’s time to report such perpetrators to authorities,” the Commissioner added.

The ceremony was also attended by other notable people such as the Member of Parliament for the area Honourable Masauko White who was the guest of honour.

Speaking during the ceremony Honourable White introduced the commissioner and the Officer incharge for Thyolo prison Superintendent Mary Mbonekera.

“Am a happy man to see these women taking charge.This is what we call putting women in high positions” Said White.

Finally the Member of Parliament asked the victims of Gender based violence to
report to police and other organizations concerned with these malpractice.