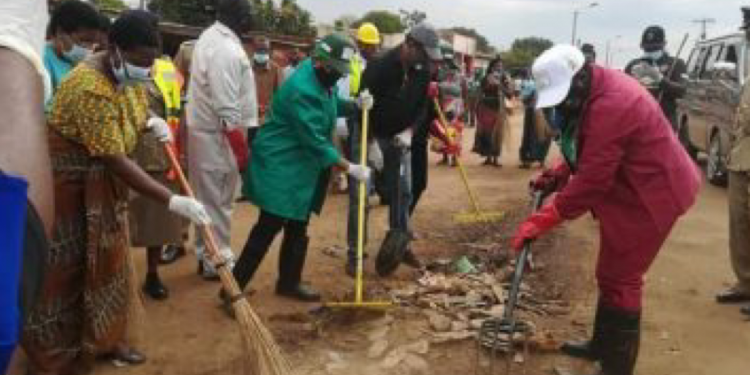 Minister of Industry, Roy Kachale, has appealed to Malawians to take the clean-up exercise seriously and consider it one of the means of fighting disease outbreak.

Speaking at the launch of the district clean- up exercise at Songani Market in Zomba, Kachale said some of the diseases that the country suffers from are as a result of poor waste disposal as well as lack of proper hygiene.

He said, through the clean-up exercise that every Malawians has been asked to participate every second Friday of each month, sanitation in both villages and towns would be improved and the country would do away with huge expenses on health as well as environment.

“Sanitation is key to human health and as a country, we really need to implement the clean-up exercise if we are to improve on hygiene and sanitation. Everywhere you can go including here in Zomba, you will find heaps and heaps of refuse uncollected and people throwing waste anyhow.

“We need to change our mindset and manage our waste effectively but most importantly, collectively take part in cleaning our locations,” the Minister said.

Kachale also condemned the behavior of some Malawians who dispose of waste anyhow on the
basis that council cleaners would do the cleaning. This, he said, is a retrogressive type of thinking which he said would only do more harm than good to the country.

“Let us always be positive in our thinking and do things that would make this nation clean and great,” he said.

Zomba District Council Deputy Chair, Mcpherson Silumba, said the council is ready to implement the clean-up exercise and that a number of activities have been lined up. Sulumba said among others, every councilor would be tasked to monitor cleaning exercises in their wards and encourage more people to join in the campaign.

“We are happy that we have launched the campaign. As a council, we would want to make Zomba District clean and that would be achieved by taking this exercise seriously,” he said.

Senior Chief Malemia said the launch of a clean-up exercise is long overdue. The chief said the rate at which the waste was being managed; it just needed prompt action such as the clean-up campaign.

“As a leader it is my duty to ensure that people take part in the clean-up exercise. I am sure that going forward, Malawi would be one of the best country in terms of hygiene and sanitation, senior chief Malenia said.

President Dr Lazarous Chakwera launched the clean-up exercise on Wednesday in Lilongwe.
The exercise is aimed and improving sanitation of places by among others sweeping and proper waste management.