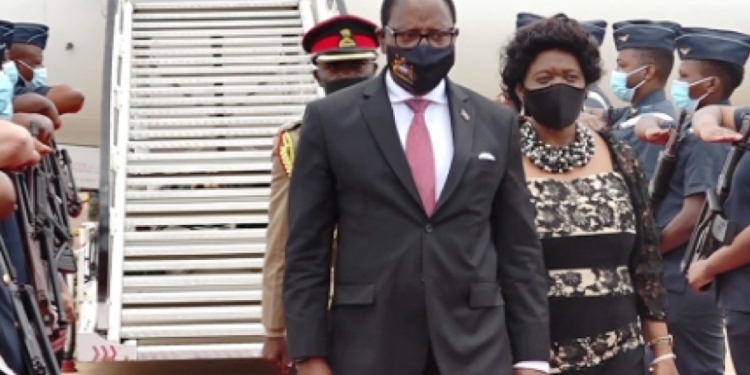 President Lazarus Chakwera has arrived in Pretoria, South Africa today for a two-day working visit which will enhance relations between the two countries.

He was welcomed by South African Minister of Agriculture, Land Reform and Rural Development, Thoko Didiza and leader of the Malawi Delegation, Minister of Foreign Affairs and International Cooperation, Eisenhower Mkaka among others.

South African President, Cyril Ramaphosa, is expected to hold bilateral meetings with President Chakwera in order to enhance bilateral relations that exist between the two countries with a focus on the strengthening economic cooperation.

Meanwhile, Mkaka has described South Africa as a key partner to Malawi.

Most Malawians work and seek opportunities in South Africa as Malawi continues to enjoy economic prosperity which is attributed to foreign investment including trade agreements,” he said.

Malawi and South Africa are known to share a long history of ties which date back to early 1960’s and they are both under Commonwealth.

President Chakwera, is having his engagements concentrated on areas of cooperation and strengthening of the cordial relations that already exist between the two countries.

While in South Africa, President Chakwera’s engagements will likely be concentrated on areas of cooperation and strengthening of the cordial relations that already exist between the two countries.

The Malawi leader is expected to return home on Friday through Kamuzu International Airport.