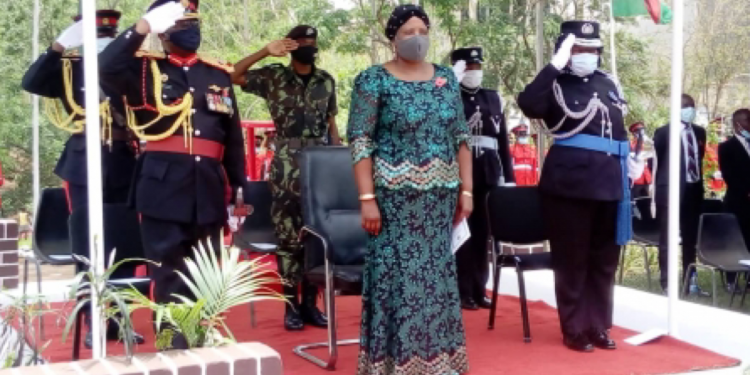 Malawi Defence Force (MDF) Sunday celebrated a remembrance day in all the three regions of the country.

In southern region, the ceremony took place at Cobbe Barracks Memorial Tower. Minister of Health, Khumbize Chiponda represented President; Dr Lazarus Chakwera was in the Mzuzu
for the main function.

According to major Frank Kayanula of Cobbe Barracks, the world war remembrance day is a great day for MDF and all soldiers in the world as they remember all soldiers who lost their lives while participating the two wars.

He said the event was meant to appreciate the role of living ex-service military personnel. Kayanula said in Malawi, the day is remembered for the contributions that the departed as well as ex- service solders made in all the country’s major operations and different operations outside the country citing the Democratic Republic of Congo (DRC).

As early as 9 am, people had gathered to witness the colourful ceremony. At 10:55 am, Chiponda arrived at the venue and inspected the guard of honour before the ceremony
commenced with two gun salutes to mark the crescendo of the event.

Other notable faces at the ceremony who laid wreaths were, William Susuwele Banda, who
represented Leader of Opposition in Parliament, Second Deputy Speaker of Parliament, Aisha
Mambo, Mayor of Zomba City, Ben Bula.

Every second Sunday of November which is close to November 11, the whole world commemorates the day to appreciate the role of soldier both late and living plated in all major operations including the First and Second World War.