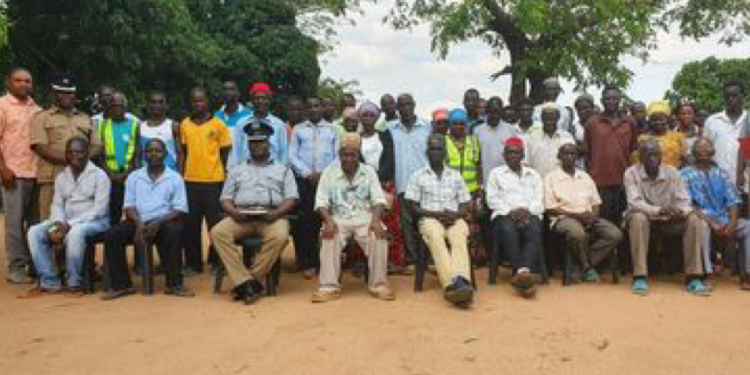 In a bid to strengthen the good relationship between Police and members of the public, Mangochi Police station organized an awareness meeting aimed at implementing security strategies .

Spearheading the team was the Officer ln-Charge Francis Chisoti, Senior Assistant commissioner of Police, who was accompanied by six officers from different branches.

“As leaders, you have an important role to play in your communities, we need to work together so that Mangochi should be a crime-free-zone. l urge you to continue working hand in hand with the Police and stop taking the law into your own hands by killing or injuring suspected criminals,” he said.

Chisoti warned : “Let us always remember that any person who is under the age of 18 is regarded as a child and it’s everyone’s duty to protect them.

“Those who molest these young girls deserve to be punished so let’s work together in fighting against such malpractices,” said Chisoti.

He also urged the members to protect people with albinism and implement the district by laws on girls education, sexual rights and reproductive health.

Speaking on behalf of T/A Ntonda, GVH Ntonda commended the Police for tirelessly working in
order to bring peace and sanity in their area.

He requested authorities to build a Police unit in their area since they walk a long distance to find the nearest unit at Chilipa. GVH Ntonda assured the Police that his area is implementing the by laws on girls education and child marriages but he cited parents as a stumbling block for seeking to marry off their daughters.

He also asked the Mangochi Police chief to equip community Policing members with working materials in order to make their job easier.