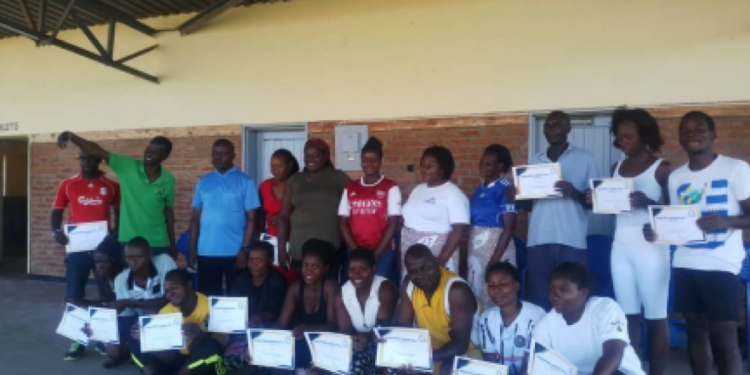 Chief Sports Officer responsible for Mass Participation, Joseph Mazaza has said the country stands at a better position as far as netball is concerned. He said there is much needed talent available in local communities.

Mazaza said instructors have planned to came up with coaching path way in netball, in which they found out that there were four levels, which include; foundation, developmental, intermediate and elite.

He made the remarks at the end of a five days training of netball coaches and umpires organized
by Balaka District Sports Office.

The Chief Sports Officer said that, “During the coaching path way foundation level, we train coaches to drill girls from five to 10 years, at the second level of developmental which is for girls of 11 to 14 years, the third one is intermediate which is of girls from 15 to 17 years and the last one which is the elite is for girls from 18 years above.

“We have created an order in which netball can be developed in phases which were not possible in the past; this will help our young girls to go up the ladder step by step and at the end we will have well trained netballers with the much needed talent,” he said.

Mzaza said all coaches in Malawi were also categorized according to the age group they serve.
“People could just wake up and claim to be a coach or umpire without even having a certificate,
this also has also led to the down fall of the netball industry in Malawi,” he said.

“I am urging all these participants to maximize the skills they will get from here so that we develop netball in Balaka,” the Officer added.

Mazaza called upon other district sports officers to emulate the example set by Balaka, saying this was what would develop the game of netball.

One of the participants to the training, Michael Dafutala said the training has come at the right
time, admitting that he was one of the coaches who were doing the job without the technical know-how.

“This training will go a long way in uplifting netball in Balaka; we have the cream of netballers in our areas and we are able to tell that given the necessary support and skills, these will be very
good players.

“All I can ask from the Ministry is to consider bringing trophies for girls at all the four levels separately; what happens now is that girls from developmental level compete with those in the elite level which is not fair, let girls from the same levels compete,” he said.

At the end of the training, participants were awarded with a certificate of attendance, but will also have to sit for exams for them to be deemed qualified umpires and coaches.