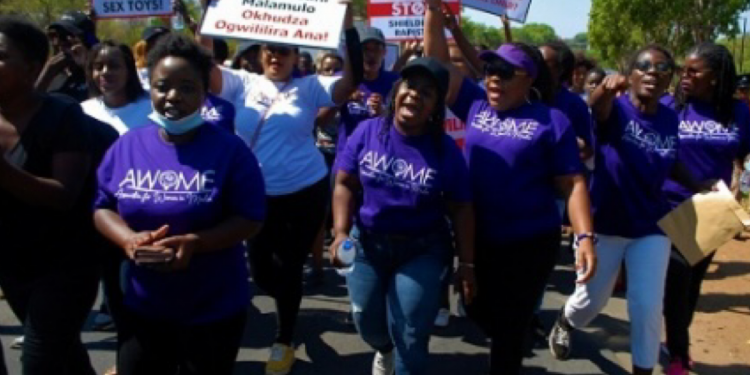 The Association of Women in Media (AWOME), a grouping of female media and communications personnel in Malawi has demanded government to review sentences given for sexual violence in order to toughen punishment given to perpetrators of defilement and rape in the country.

AWOME Chairperson, Edith Kambalame said this in Blantyre when members of the grouping in Southern Region held a protest march against the rise in defilement and rape cases in the country.

“As we go about covering such stories, we have come across heartbreaking stories of what numerous women and girls have gone through at the hands of men who behave as if they have no control over their sexual feelings.

“So many women are living with the trauma of their unfortunate experiences.

Women are generally becoming more and more helpless on these issues,
even when they are supposed to be protected under both local and international legal instruments.

“We have written about these ills and used our platforms to raise awareness about the escalating levels and the need to find a lasting solution.

“We acknowledge the fact that in some cases, perpetrators have been prosecuted but obviously the punishments have not been a deterrent to other offenders,” said Kambalame.

She said in line with the proposed punishment, AWOME also wants defilement and rape cases to be tried in the High Court, unlike now where the cases are presided in magistrate courts.

“Further, those who shield sexual offenders must be proactively prosecuted according to the law,” said Kambalame.

She also appealed to girls and women to stop shielding sexual offenders saying much as AWOME acknowledges that it is difficult when they are breadwinners but the impact of their actions on the victims can be long lasting.

“To girls and women, we are each other’s keepers; protect your fellow women from sexual abuse Report it.

“Do not suffer in silence, speak out. Get liberation. We need the voice of every woman in this fight. Join the fight,” urged Kambalame.

During the march, representative of Women Lawyers Association, Madalo Banda pointed out the need for more education and awareness surrounding issues of defilement and rape so as to make people aware
of what the law says.

“I believe there is misconception within the general community about defilement or what amounts to defilement. People assume that as long as the child consents then it does not amount to the offence of defilement.

“People need to be made aware that it does not matter whether there was consent or not because a child under the age of 16 cannot give consent,” said Banda .