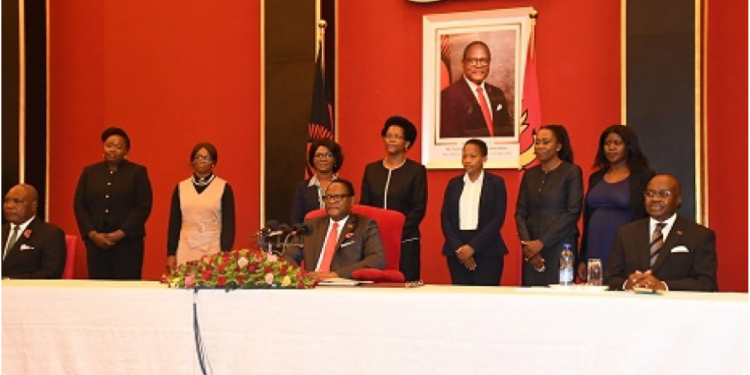 President Dr Lazarus Chakwera has urged the new judicial appointees as Justices of Appeal in the supreme court of Malawi and judges of the high court of Malawi to always serve with the highest integrity and honour in the course of dispensing justice.

The President made the remarks on Thursday in Lilongwe at the swearing in ceremony of the new judges and Justices of Appeal.

“Your place on these benches holds the prize of alleviating suffering and mending injuries”.

“In other words to be a judge is to join God in his work of serving the poor and lifting yokes from the shoulders of the appraised and to labor for the wellbeing of others more by listening than talking,” Chakwera explained.

He added that to render the service of justice it is critically important to see it as their task to repair the broken legs of the sacred table of justice.

“The first leg that the table of justice stands on is truth which is often obscured by lies, hearsay, innuendo and error yet without it there can be no justice.”

The second leg that the table stands on is peace, our courts exist as an avenue for the peaceful resolution of disputes so at to prevent us from imploring violent means towards that end, as such those who sit on that bench must be people who not only love public peace but hate all open and secret enemies of that peace,” Chakwera urged.

The President included courage to resist external forces such as corruption and intimidation and also striving for knowledge as fundamental to successfully serve the nation.

The new Justices of Appeal to the supreme court include Justice Healey Potani, John Katsala, Ivy Kamanga and Charles Mkandawire, whilst the judges to the high court include Her honour Agnes Patemba, Vikochi Chima, His honour Justus Kishindo and Simeon Mdeza to mention a few.