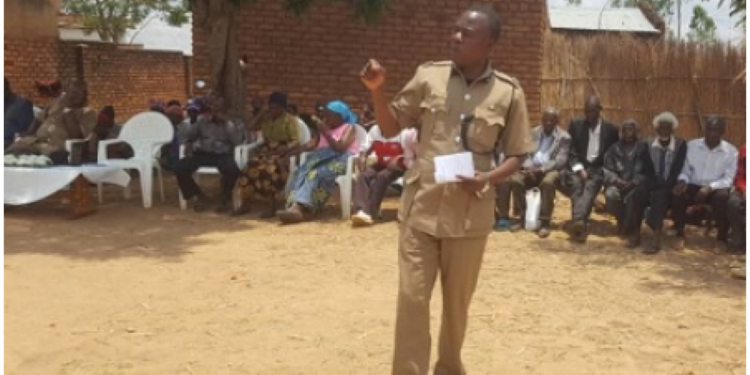 Police in Ntcheu has urged chiefs to take a leading role in protecting lives of persons with albinism barely a week after unknown people exhumed a body of a person with albinism in the district.

The Call was made on Wednesday at Mphepozinayi in the area of Traditional Authority (TA) Ganya in Ntcheu, as Police engaged chiefs in the district to map the way forward on how they can deal with the vice the country is facing concerning people with albinism.

Director of Community Policing, Assistant Commissioner of Police, Obrey Nyirenda said it was worrisome that cases against persons with albinism are now resurfacing despite serious interventions by different stakeholders.

The meeting which was aimed at strengthening the relationship between Police and community members, brought chiefs together so that they can be conduits between their communities and the police.

“We engaged chiefs so that we can build a good working relationship with the community inorder to deal with the malpractice,” he said.

Nyirenda said: “It was very worrisome that the issues against people with albinism are now resurfacing though not at an alarming stage. That is why we decided to bring the attention of the people by engaging the chiefs so that we should be able to work together in fighting with the vice.”
He said as Police they have put a number of measures to make sure that they have intensified security in communities, mentioning of empowering and strengthening community policing in the country.

“We are determined to make sure all the Community Policing structures are being implemented and strengthened so that the security of people with albinism is guaranteed,” the Director said.

Chairperson for Association of People with Albinism in the District, Precious Kapenuka said Police should make sure that they have implemented and strengthened community policing structures in all areas in the district.

“Police should make sure that they have put in place serious community policing structures in all areas here in Ntcheu, sensitizationcampaigns should also be done accordingly here in the district before the situation gets worse,” he said.

Ntcheu Officer In Charge, Louis Chigadula condemned the incident where the body was exhumed, saying it was inhuman and needs urgent action to end the vice.

He said as Police in the district they are planning to introduce mobile courts so that community members should be able to follow and know how cases are being pursued in courts.

”It is worrisome to note that the vice is perpetrated by relatives that is why we are calling for unity among the community members so that together we can fight the malpractice,” Chigadula said.