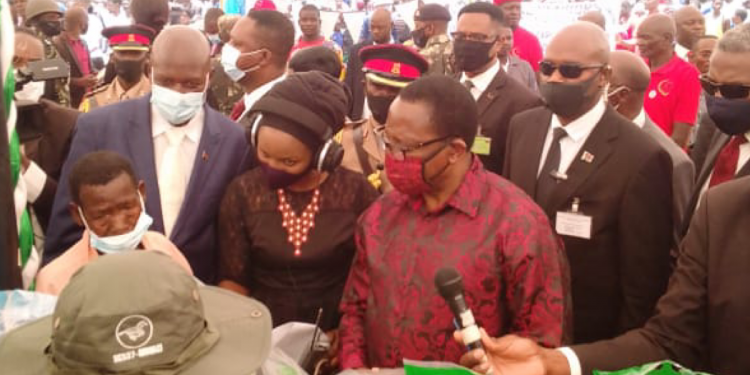 Speaking when launching the program at Pirimiti boys school ground in Zomba Likangala, president Chakwera told the nation that although the program is not benefiting the entire Malawi’s population of 18 million plus, but it is a target on all subsistence farming households not including mega farmers.

President Chakwera further said the program is a deliberate move to deal away with the continous hunger crisis hitting Malawi yearly. He added that with the program, 3 meals a day is very possible to Malawian citizens and others will indirectly get employments. President Chakwera said it is the wish of his administration to reduce the big gap that exist between the poor and the rich.

On the standards of agricultural produce, president Chakwera said his government will revamp the agriculture schemes and extension workers program to make sure there is enough food that can even be exported to other countries and better standards at all levels. He then told the nation that he chose to launch the program in Zomba knowing it is one of the areas where rains start.

President Chakwera has since urged the private sector to work hand in hand with the government in serving Malawians, but was quick to warn those thinking of getting contracts in dubious ways that their time is over and the law shall always take its course.

In his remarks the minister of agriculture Honorable Lobin Lowe said all measures to make sure there are no malpractices have been put in place and that his ministry in working hand in hand with the ministry of information, ministry of homeland and security and ministry of Civic education to make sure there is smooth running of the program. He has since advised farmers to be applying manure in their fields in addition to fertilizer to boost the harvest.

This year’s AIP is targeting 4,279,100 households from the previous 900,000 and will see a 50kg bag of NPK(23:21) and Urea going at affordable K4,495:00 leaving the government paying K15,500 per bag of fertilizer. The package will also have some seeds like maize as it aims at attaining food security at both household and national level. The program has been pegged at K160 Billion.